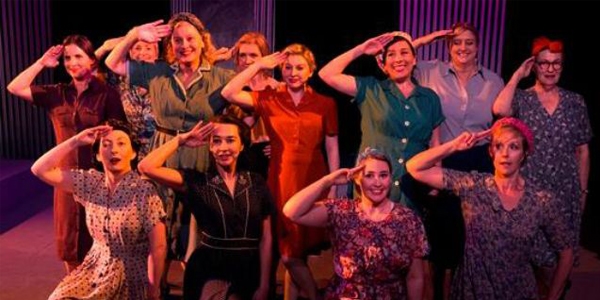 Dinkum Assorted is a vibrant play showing at the New Theatre in Newtown from the 17th November until the 19th December. With fifteen strong female leads, the show bursts with vibrancy and excitement. They bring to life a story of the working women in Warrabadanga, during the winter of 1942, when WWII is in full flight. It’s a story of courage and resilience, with a twang of iconic Australian humour.

The New Theatre presented this play with spectacular excitement. The production was very well casted, as each actor played their character to the full- an element not to be forgotten which really helps the audience immerse in the context of the play. Moreover, they’ve got a stellar cast, of experienced, enthusiastic women, whose excitement for the show was infectious and really lifted the performance. Debra Bryan’s portrayal of Connie, the resident outsider, set my teeth on edge- she was just such a brilliant villain of sorts, until of course, we see some humanity and we sympathise with her. Hannah Raven Smith and Amanda Laing were a marvellous pairing, bouncing off each other, with excellent comic timing. The cast was a delight.

The play explores the microcosm of Warrabadanga, which represented the Australian experience during the 1940s. I was quite impressed with the authentic costuming and historically accurate references. It’s so refreshing to see a play that champions strong women in a distinctly Australian setting. The actors managed to make the contextual Australian vernacular effortless, like using ‘sheila’ and ‘drongo’ in a realistic sense. While a great night out at the theatre, I really felt that the play was a learning experience as well, like watching a period drama film or the like. Commendations to the set and prop department, who created set pieces that helped us imagine the spaces, wherever the actors were; a biscuit factory, a hill overlooking a quarry, a chook shed.

The play was a rollercoaster of emotional highs and lows. We followed the women through their turmoil, as they dealt with personal histories and private angst, and how they intertwined and gossiped, as close-knit communities do. We saw their deflation when the biscuit factory was proposed to be shut down, and we triumphed as they discovered newfound resilience and set their minds on saving the lifeblood of the town. The youngest characters had very real aspirations, and their energy was shared by all. I think the most impressive part of this play was that playwright Linda Aronson gave these characters texture and vitality, and the New Theatre gave them life.

The play seemed to lose pace and momentum towards the end of the plotline. Nevertheless, it ended with a bang, with three dance acts, all glittery gold. The main musical numbers were very well choreographed and ended the play on a high with tap-dancing and singing. This play showcased distinctly Australian human stories. I recommend it to all.