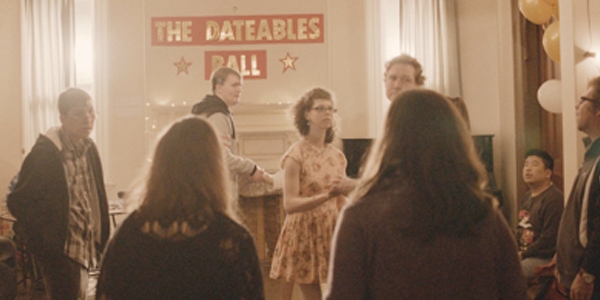 For this year’s Disability Day (3 December), emerging filmmaker hub Metro Screen teamed with Screen NSW and the Department of Family and Community Services to create #ScreenAbility, a commission of short video works for the web that challenge attitudes and common misconceptions around Disability.

Filmmaking teams were selected to develop and produce four very different shorts exploring the contemporary experience of living with disabilities in Australia that will challenge you and open your eyes.

“There are so many organisations designed to help the intellectually disabled find housing and employment – both of which are vital to achieving independence – but very few aim to help them reach beyond the realm of simply functioning in society. What about love, relationships and sex?” says Samuel.

Filmmakers from the Milk Crate Theatre created Invisibility, a piece that saw artists create physical representations of their experiences enabling others to see the world from their point of view.

Director Sarah Emery says of Invisibility, "The whole process was an experiment. It was a fun challenge trying to figure out ways to translate people's personal experience of mental illness into a wearable costume. There was a lot of trial and error. It was interesting to see those moments where the ideas 'clicked' and each person felt like it was an accurate representation of their experiences. I feel very honoured to have worked with such a generous team to make this film happen."

Participating artist, Gordon Broomham, was pleased with the outcome of Invisibility. "It was experimental and a bit unknown, but it’s important to share our experiences and increase people's understanding.  Mental Illness is not just in the mind, it's very physical."Broomham said.

Emily Dash is a young emerging artist living with Cerebral Palsy. Her piece was an adaptation of one of her spoken word works entitled I Am Not A Work Of Art that Emily performed for the film.

“In ‘I Am Not A Work Of Art’, I really wanted to explore discrimination, but not in terms of narrating specific instances. It was more like… how does it feel to be made into an object of discrimination? For me, it was about getting people to listen to the full story rather than make assumptions.” Says Emily of her work.

Filmmaker Daniel Monks also put himself on screen in his bold piece, Marrow. Baring all in the film, Daniel challenges notions of desirability that dominate the mainstream.

“Disabled bodies are so often either deemed unattractive or asexual in our media culture, which idolises physical perfection and encourages us as individuals to pursue those ideals. We felt showing a disabled body in this hyper-sexualised manner, with all its perceived imperfections on full display, was an almost revolutionary act, and one that we hope challenges audience’s preconceptions.”Says Daniel of Marrow.

When asked what drove her to make the film Emily Dash says, “What I’d like for people to take away is two-fold. I would hope that people with disabilities feel empowered to fight back against discrimination in whatever way they can, and know that they are not alone.  I also hope that it will provoke non-disabled audiences to confront their own misconceptions about disability, which is a step towards changing perceptions in the wider community.”

#ScreenAbility is a Metro Screen initiative supported by the NSW Government through the NSW Department of Family and Community Services and Screen NSW.