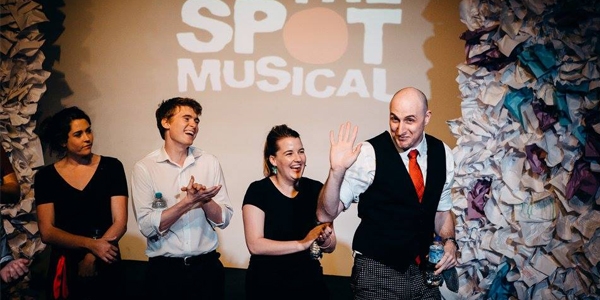 The Jetpack Theatre Collective has brought a swathe of unconventional projects to the fore in 2015; from a monologue performed in a rowboat along the banks of Iron Cove, to a wandering performance through the streets of Newtown, to an interactive horror piece that thrusts its audience into a dank and dark maze armed with a loose purpose and a torch. These fresh faces are not sinking lazily into old hat tricks, but vigorously pulling theatre to new, less-traversed horizons. In one year, they’ve managed to put on a staggering twelve productions, quite a feat for a young theatre collective with nowhere to call home.

To cap it off, the debutantes have squeezed in the Jetpack Spontaneous Theatre Festival, now showing at the (new) Old 505 at Eliza Street Newtown. On the Spot Musical is the main event, partnering four players from the collective with two stars from the world of musical theatre to create an improvised musical. While the subjects will naturally be vastly different for each performance, to give you an idea – at the performance I attended, the antipodal words plucked from the audience as musical fodder were “osteoporosis” and “Atlantis.” From here, the performers begin to improvise a narrative before seguing rather seamlessly into a show tune. The paradox of the formulaic nature of musicals with the off-the-cuff nature of improv is not lost: Jetpack’s performers pulled it off with fantastic wit and enviable ingenuity – you have to be quick as a wink to keep up with this game.

Each On the Spot Musical will be followed by a showcase of Sydney’s standout improv acts (for more details about each act, click here). Part of the joy of theatre is its mercurial nature – with so many variables coalescing to make each performance slightly different. Jetpack’s conceit seems to be to amplify the variables to ensure a thoroughly unique performance every time. And that’s fine by me.

The Jetpack Spontaneous Theatre Festival is running until Saturday the 19th December, for tickets click here. To learn more about Jetpack Theatre Collective and their exciting 2016 program, visit http://jetpacktheatre.com.