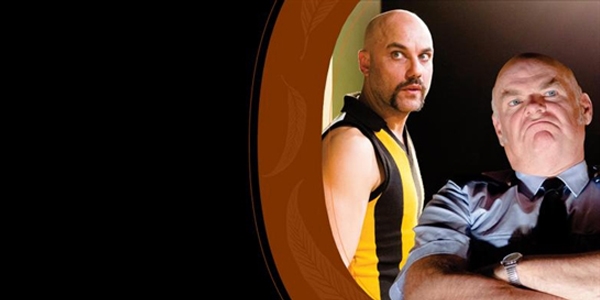 Theatre review:
I'm a child of the 80s and 90s. I grew up in the era of incredible growth and development in Sydney, and I was witness to the growing popularity of great early cultural exports. Aussie icons like Crocodile Dundee, Nicole Kidman, Mel Gibson. All this and more culminated in the 2000 Summer Olympics, with Kylie Minogue in the Closing Ceremony extravaganza belting out On a Night like This on top of a massive bejeweled thong (a flip flop, for any international readers of this post).

It's with this cultural upbringing that I viewed David Williamson's play The Removalists, a violent, explosive performance that was set in the 70s (it premiered in 1971) and is not only a product of its time, but a memorable piece of theatre, too.

Constable Neville Ross (Josh Anderson) is starting his first day at a police station run by the tough Sergeant Dan Simmonds (Laurence Coy). Fiona (Lucy Heffernan) and her sister Kate (Caroline Brazier) arrive to file a domestic violence report against Fiona's husband Kenny (Ashley Lyons). In the lead-up to the explosive ending in Fiona and Kenny's flat, everyone seems to have shown their true colours, and the Removalist hired to move Fiona out of her flat (Ben Wood) is in no mood to take part in anything other than ensuring he just does what he's paid to do.

I've not seen any of Williamson's plays performed on stage, and I've seen Don's Party on TV years ago, but I know that The Removalists is part of that era of the Australian cultural shift when we were just coming into our own, internationally. Williamson shone a light on suburban Australia in his plays, and in The Removalists, it's to show that people in authority often abused their power, and the machismo of the 70s was far worse below the surface and not really as loveable as the Aussie Male Larrikin we all want to remember.

This is probably the first black comedy where I felt a little on edge laughing through the performance. Sure, Anderson and Coy's dialogue in Act 1 were without a doubt terrific (and I don't know if it was because of the actor's chemistry or the handiwork of director Leland Kean), because the rapid-fire dialogue between them worked well to set up what would be a very very different tone for the second half of the film. But I just felt ... uneasy ... through some parts of the play.

However, I think that's the reason why The Removalists has stood the test of time and remained so popular. You're asking yourself, how can someone so loveable be so horrible? How can sweet Fiona be with brutish Kenny? How can Kate stand by and watch her sister go through such a loveless marriage when she herself isn't that great in the relationship department either?

For new audiences like me, you have to learn to put aside your 2014 views, and accept that The Removalists was a product of its time. If it had it been made with the same themes today, it would be a pretty black-and-white tale. However this is why it's such a tough play to watch, because you're constantly asking yourself who's the bad guy and who's the good guy. One minute you're giggling in your seat, the next you're gasping in horror.

What The Removalists is not, however, is a soft piece of theatre. Themes of brutality, abuse of power and the horrid side of relationships is all on stage for us to experience. And despite the fact that yes, this play was originally made in the early 70s, its themes are still just as