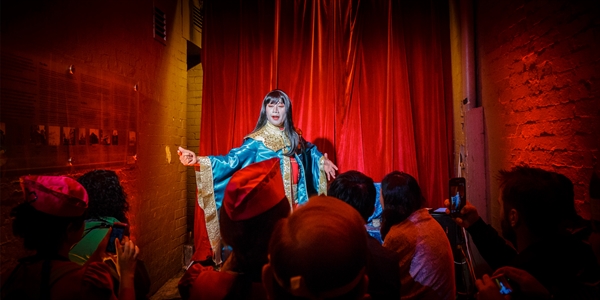 Review by Nicole Patterson
Established in 1788, The Rocks derives its name from the sandstone rock buildings, some of which remain intact.
This precinct lends itself to the Village Bizarre currently on every Friday from 6.30pm.
As you wonder around this enchanting part of Sydney be sure to look out for the quirky and quacky and quintessential characters of a bygone era.
Now in its fourth year, an initiative from Sydney Harbour Foreshore, whose creative director, Michael Cohen said he wanted something for Sydney siders to enjoy.
There is opportunity to conjure up the spirit of say 'Carmen Miranda' or 'Bugsy Malone' if you so desire with the help  of professional make up artists and dressers and maraude the streets freely for a couple of hours. There is foood stalls, a slide show, cabaret style performances, the opportunity to dance in the dark in a setting with great music called 'No lights, No Lycra'.
Watch out for an inflatable two story man or a snake oil merchant, talking lamps and amazing shopfront displays of Dance.
The senses are alive as the atmosphere is buzzing. Though not all those that inhabit the Rocks are happy with their patch being overridden. Lookout for the waspish looking sepia jezebels who didn't seem impressed with the influx of new arrivals.
Don't miss it. Free every Friday from 6:30pm until 18 December.
SHARE
TWEET
PIN