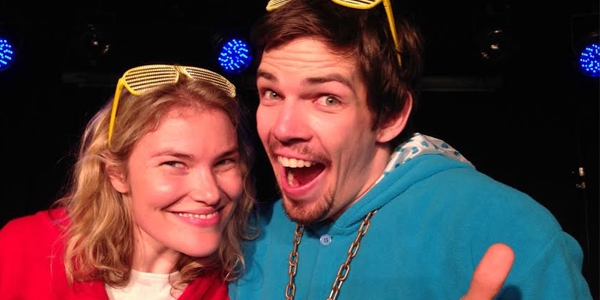 Most people go weak at the knees when they think of standing up, on stage,  in front of a hall of people.  Most people would freeze up, feel the trickle of sweat roll down the back of their neck, and their mouth suddenly go dry.  Most people wouldn't dare step on stage with no speech or prompts. Yet, there is a special group of people who do.

The Cranston Cup is Australia's esteemed theatresports competition. Teams of two or more don the stage to showcase a panel of judges and audience members their skills of improvisation. Their prize? Being crowned the winners at the 2015 Cranston Cup Theatresports Grand Final at the Enmore Theatre on the 28th of November.

I saw the third semi final at The Factory Theatre in Marrickville and I had a blast. This semi final determined which two teams out of the last six in the competition were to qualify for the Grand Final. My partner and I are fairly new to the theatresports scene. We were alien to the strategies, rules and techniques,  but we were explicitly told these by our host for the night, Cale Bain, and his partner in crime and judge, Jane Simmons. Chris Dendle was the resident musical improviser on the keyboard, and he provided ambient music for each scene. In addition to three official judges, each round one member of the audience was invited to be on the judging panel, and this made the audience feel more welcome and excited.

Audience engagement was a significant part of the performance, as throughout the competition players asked for specific offers, restrictions of sorts, with which to guide their improvisation.  For example,  one team asked for a setting and a relationship, and the audience decided a dystopian era, with a shark/octopus relationship.  (This was particularly difficult!) Not only was the audience involved in the story-making process, but the quick wit and spontaneous comedy from the players made a evening very entertaining.

Throughout each scene,  competitors can jump on stage and help each other as props, can challenge teams with proposed scenarios and can work with predetermined topics or own the open stage.  I was in awe at the level of confidence that exuded from the players,  the teamwork within each team, the hilarious dynamics between team members and the scenarios they came up with.  No challenge was too hard.  Challenges I saw were that players were not allowed to use the letter S, that all players must be grannies, that they must replay the scene as birds, present a soap opera, or that they must break into dance at random.

Improvisation is a skill to be celebrated, and the Cranston Cup is the place to see professional spontaneous comedy at play. I highly recommend watching,  even as a first timer. It's easy to follow,  and so impressive to watch.  I encourage all to witness the talent and imagination on stage at the Grand Final. Congratulations to Sesame Streetwise, and Sure. Whatever. I Don't Care. Shut Up Already! as candidates for the Grand Final.