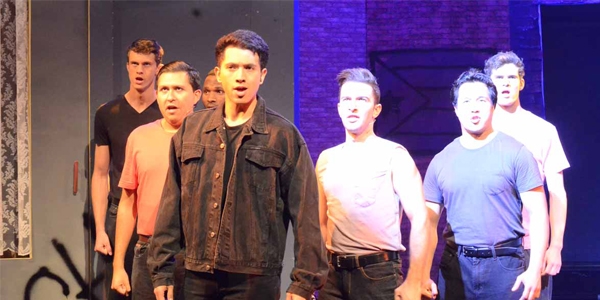 Chatswood Musical Society really captured the electricity of youth culture.  They channelled a lot of their focus on the conflict between the Puerto Rican Sharks and the rowdy American Jets. The choreography in the rival dance scenes was fierce, enthusiastic and well executed, and the brawls were organised chaos, as they should be.

The strong women were the most impressive for me. Fiery aggression from Susana Downes as Anita really brought passion and emotion to the stage. Anthony Levin and Michaela Leisk were wonderful as Tony and Maria, especially considering that both roles would be very demanding as they require a youthful innocence and some of the most memorable numbers in the show. Their acting was very convincing and I found myself clutching my chest as their star-crossed fate was twisted and muddied. Michaela’s voice was particularly spectacular, it was beautiful and precise.

As with any opening night, the performance had it's share of hiccups, with an unruly set and a delayed start time (due to Sydney's inclement weather). The cast did well to cope with these onstage hurdles, and the chorus numbers were abuzz with energy and excitement. In their prospective gangs, the cast seemed to be having excellent fun causing a raucous and provoking each other. Their enthusiasm was infectious and carried through to the audience. While the orchestra wasn't as crisp or clean as previous adaptations I've seen, they set the atmosphere and accompanied the singers well.

While rowdy gang violence is one aspect of West Side Story, I wonder whether the excessive violence was necessary.  There was a particularly graphic scene toward the end of the musical, which I found inappropriate for a general family audience. The scene is a pivotal plot point, where Anita travels into hostile territory to give a message to Tony, however I feel the scene could've been adapted more tastefully. West Side Story is a tragic love story, but I felt I couldn't connect with the ending because I was still in shock, as the final moments snowballed into tragedy.

West Side Story is playing at the Zenith until November 21st.