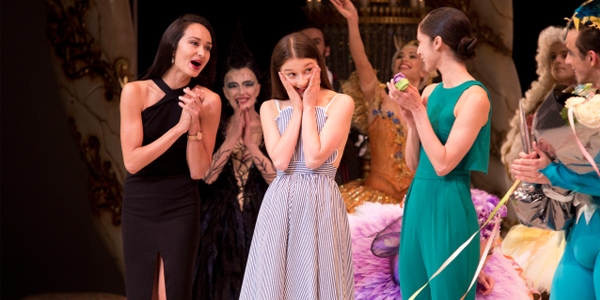 SYDNEY, Australia – Friday, December 4, 2015 – Benedicte Bemet has been crowned the 2015 winner of the Telstra Ballet Dancer Award (TBDA), the most prestigious prize in The Australian Ballet.

In recognition of her exceptional talent and outstanding achievements throughout the year, Queensland-born Benedicte will receive a $20,000 cash prize from Principal Partner Telstra. In 2013, Benedicte won the Telstra People’s Choice Award, which was decided by public vote, and has now successfully taken out the title of the Award, now in its 13th year.

Born in Queensland’s Mackay, 21 year old Benedicte moved to the Gold Coast at a young age and first started dancing as early as three years old. She relocated to Hong Kong where she continued her passion for ballet and started dancing professionally when she returned home at age 14, to later join The Australian Ballet in 2012.

The announcement was made by Telstra Chief Financial Officer, Warwick Bray on stage at the Sydney Opera House following a performance of David McAllister’s The Sleeping Beauty.

While presenting the Award Mr. Bray said, “One of the greatest successes in our 31 year partnership has been the establishment and legacy of the Telstra Ballet Dancer Award which is dedicated to supporting and encouraging the future of The Australian Ballet’s rising stars.

“On behalf of Telstra I’d like to congratulate Benedicte on this outstanding achievement. What a remarkable accomplishment at such a young age and we look forward to watching her career blossom in the years to come,” continued Mr Bray.

“Since joining The Australian Ballet in 2012, Benedicte has been a dancer who catches your eye. Whether in a line of swans or dancing Clara in The Nutcracker, she dances with a passion and confidence that have made her an audience favourite. Benedicte joins a very impressive list of former Telstra Ballet Dancer Award winners and will add great lustre through what I am sure will be a very exciting future with The Australian Ballet,” Mr McAllister said.

The award has helped catapult the careers of some of The Australian Ballet’s brightest stars, with seven former winners being promoted to principal artist in the company following their award, including Matthew Lawrence (2003 winner), Amber Scott (2004), Lana Jones (2005), Daniel Gaudiello (2007), Kevin Jackson (2008), Ty King-Wall (2010) and Chengwu Guo (2011).

The nominees were judged throughout the year on their contributions both on and off the stage to the company. This year’s TBDA judging panel was formed by David McAllister (Artistic Director, The Australian Ballet), Libby Christie (Executive Director, The Australian Ballet), Carmel Mulhern (Group General Counsel, Telstra) Robyn Foyster (Publisher, The Carousel) and Katarina Kroslakova (Editor, Life & Leisure, AFR).

For the first time in 2015, ballet as an art form was taken to another level with a series of unique artist-dancer collaborations revealed to announce the 2015 Telstra Ballet Dancer Award nominees. The series spanned an array of art categories with some of Australia’s most talented installation artists and designers.

As part of Benedicte’s nomination for TBDA this year, she collaborated with fashion duo, Aje. to create a stunning video and image series.

As part of Marcus’ nomination for TBDA this year, he collaborated with international fashion photographer, Jez Smith to create an epic video and image series.

Audiences can see Benedicte and Marcus on stage during The Sleeping Beauty touring nationally now.