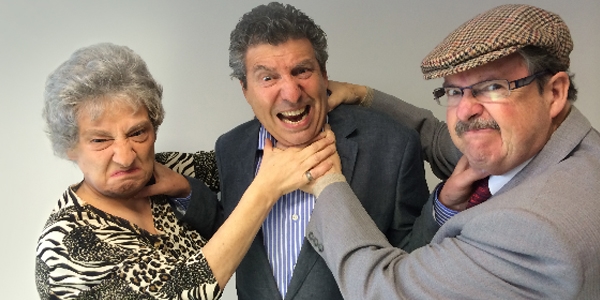 Fresh off the back of a sell-out season in Melbourne, Los Trios Amigos are bringing their latest comedy to Bondi’s iconic Pavilion Theatre. You’re Driving Me Crazy is a fun filled send-up of the stereotypical Jewish-Aussie family, both witty and self-parodying.

The three actors who make up the company, Jack Felman, Lena Fiszman and Allen Brosteck, each bring decades of experience to the production. Written by Felman, You’re Diving Me Crazy finds all three actors on familiar ground, dealing with themes such as family, identity and change within the Jewish community.

After a slightly delayed start, the Amigos had the audience roaring with laughter at their clever one-liners. The frequent English-Hebrew switching and Jewish cultural references were not lost on the audience; rather, they struck a familiar chord, eliciting peals of laughter at the voicing of common experiences and characteristics to which the crowd could relate.

Almost every gag found its mark, although the performance often lacked pace. Essentially structured as a series of rambling conversations, some scenes were unclear in their direction, and needed something deeper than stereotypical humour to create dramatic tension. Despite the small size of the theatre, the actors were at times difficult to hear. The lack of movement on stage made it easy to lose focus; the play would have benefited from more dynamic staging.

The most emotive moments in the play were produced by the abrupt transition from the light-hearted mood to grim reminders of the trauma of the Holocaust, which lies at the core of the characters’ difficulty in relating to members of different generations. Felman’s script deftly balances the competing arguments of the four generations represented, without privileging one over the others. He avoids placing judgment on individuals, instead presenting and contrasting the various points of view and their contributing factors, highlighting the common human desires that unite these disparate characters.

While it may not be a great option for kids, as they would miss many of the jokes, You’re Driving Me Crazy is an entertaining and thought-provoking night out for teens and adults.