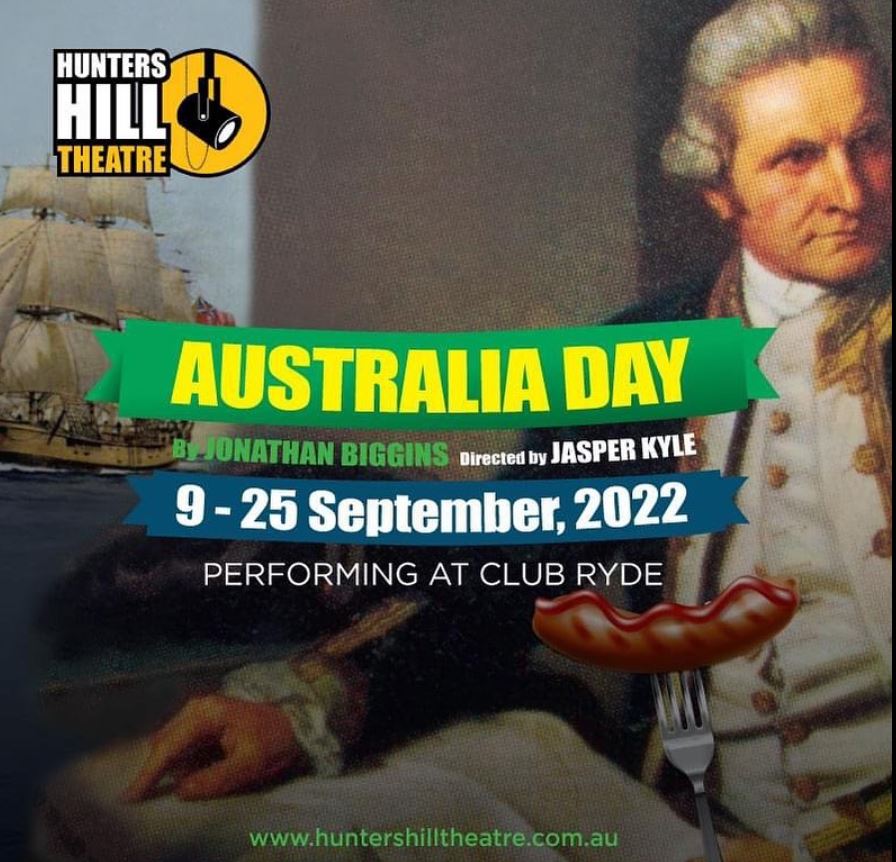 Australia Day written by Jonathan Biggins is a shamelessly controversial in-your-face play that pokes fun at the absurdity of political correctness. In recent years the play has been cancelled in several theatres across Australia for being satirically offensive. Fortunately, theatre-goers at Hunters Hill Theatre enjoyed a great night of laughs and knowing chuckles at the play’s opening night performance this week. 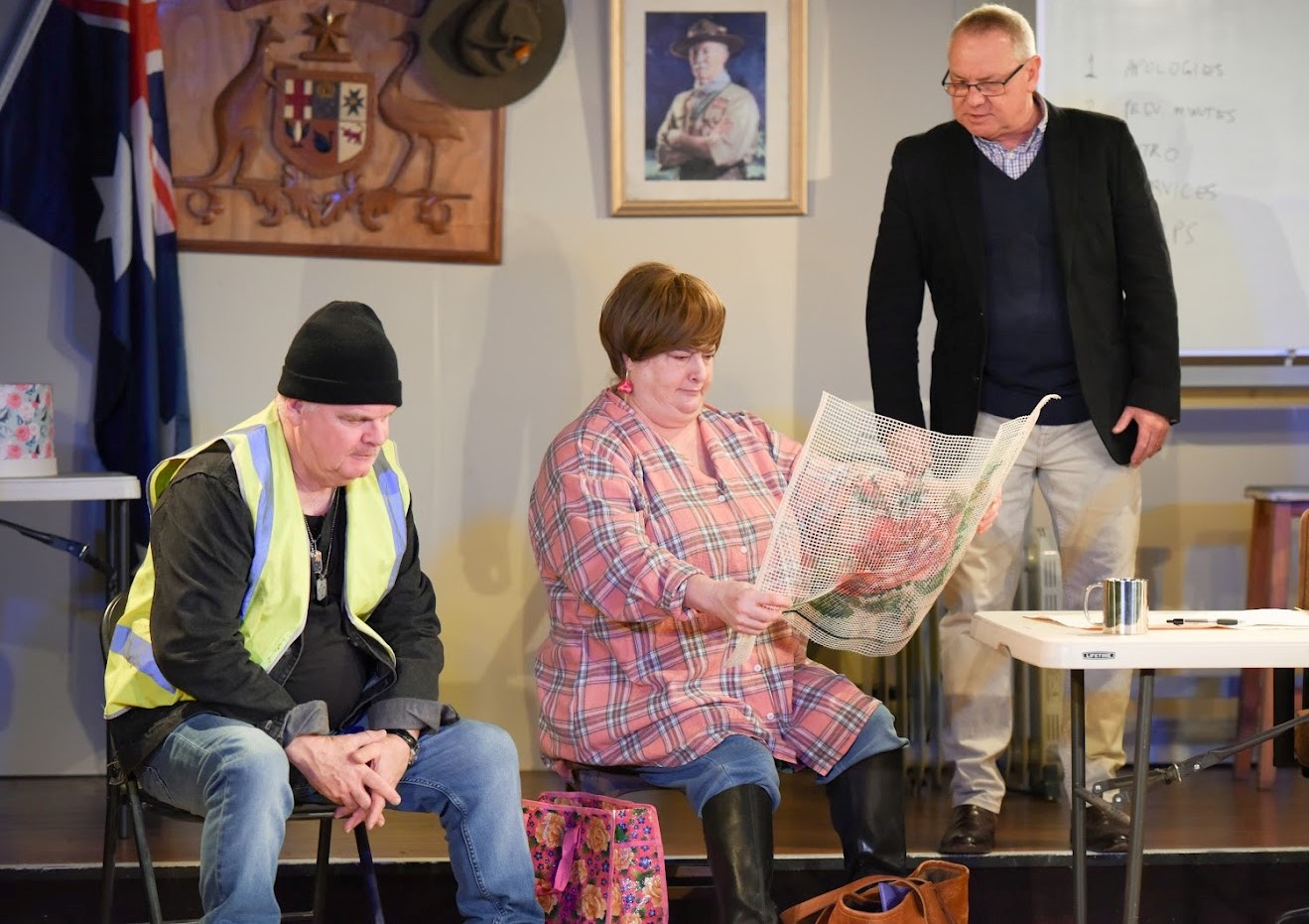 The production almost didn’t go ahead at Hunters Hill Theatre either due to three extraordinary circumstances: it was postponed in 2020 and again in 2021 due to lockdown; then this week, one of the cast members (and his understudy) both contracted COVID, making it impossible for them to be on stage. And then the Queen, who is referenced in the play, died the day before opening night, causing potential for more controversy.

Sanguinely, the director sailed the ship through these unchartered waters to finally land her arrival on Thursday 8 September 2022. The actor who contracted COVID played his part via Zoom, appearing on a laptop that was placed on the stage’s far right. It both irked and it worked. The director also made the wise choice to leave references to the Queen unaltered; as it turns out, nothing offensive was said about her. But there was plenty else to be prickly about, depending on which camp you belong to. 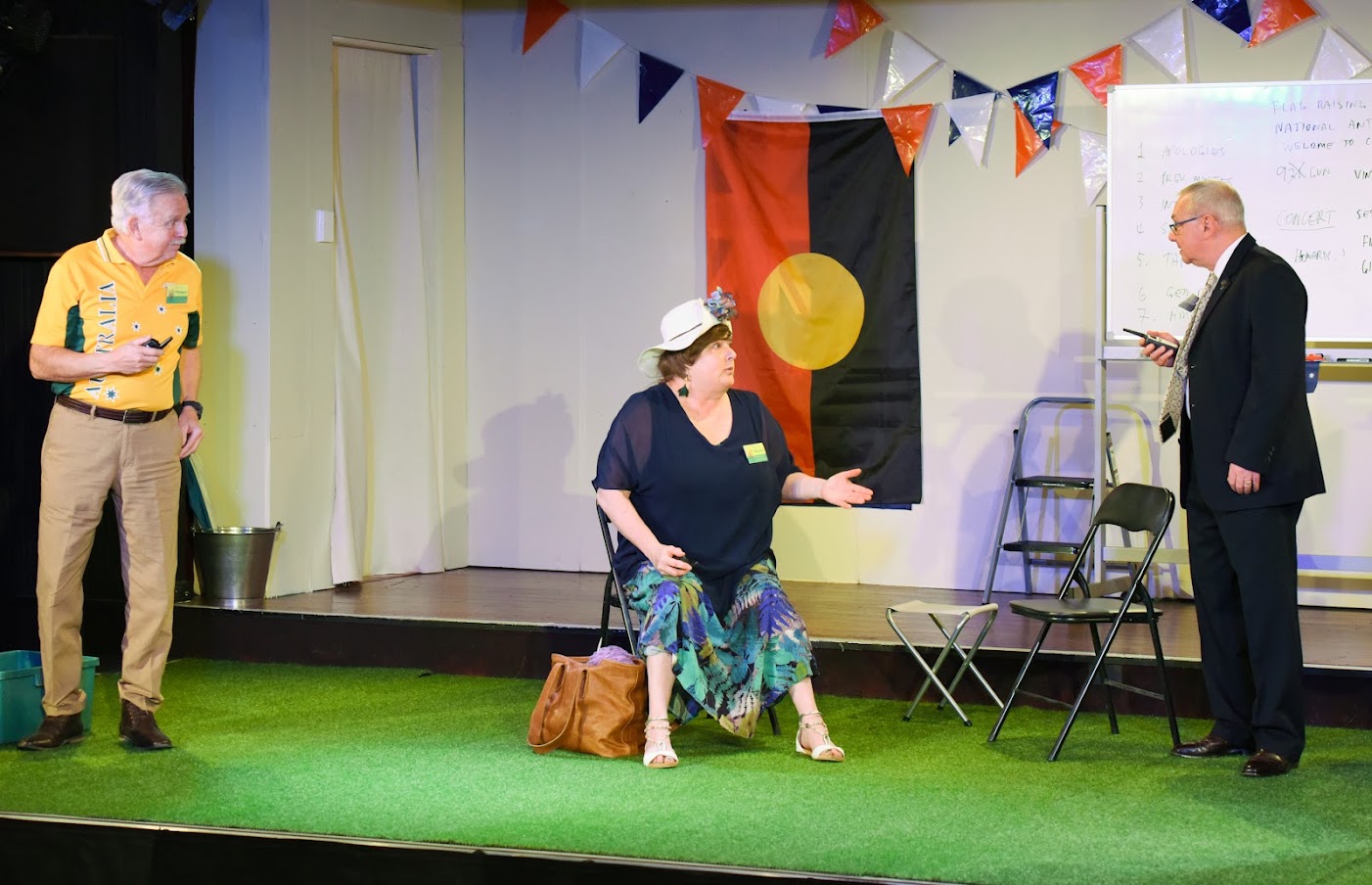 Alan Long as Wally ‘bogan’ Stewart was about as redneck as they come, not holding anything back with his racist, misogynistic, homophobic and ableist views. Charming. In the opposing corner is Cee Egan as Helen McInnes, a typical Green leftie representative who sees all progress as bad unless it profits her own situation. She desperately seeks solidarity and support from the committee’s only non-white member, Chester Lee (played by Kirit Chaudhary, via Zoom), who ‘isn’t brown or Indian’, but in fact, born in Australia to Sri Lankan parents. Instead of being outrageously offended like Helen, Chester is the master of taking the piss right back, often to the chagrin of the other committee members. As we later find out, Chester has independent views of his own that clash with populist ideals, such as the notion that every kid should win an award.

Renee Simon made her fabulous theatrical debut in the role of Maree Bucknell, a woman we all recognise as well-meaning and eager to participate, but utterly inept due to subsisting on the scraps of white-bread culture. She also stuffs up the committee’s sausage sizzle, causing a major outbreak of food poisoning. 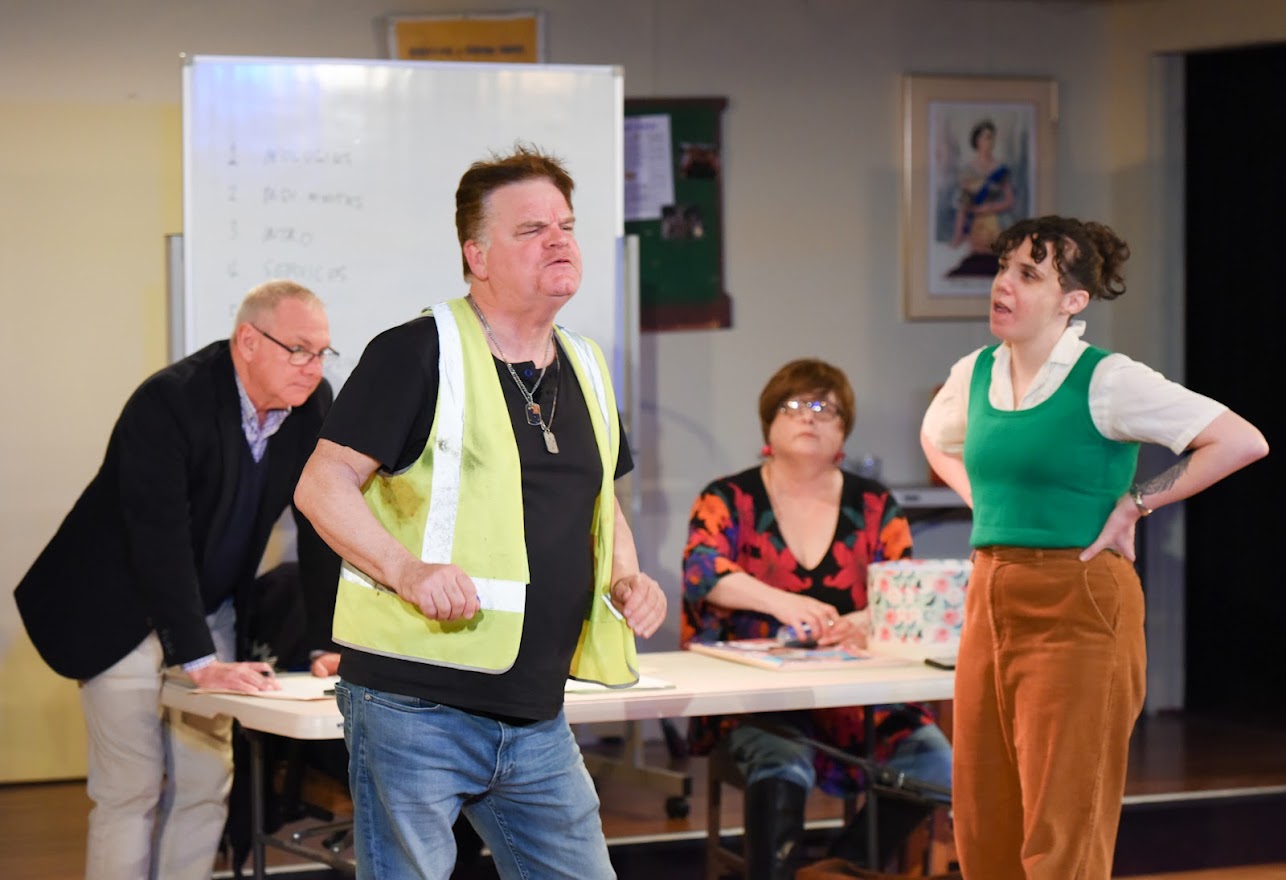 Martin Maling as Brian ‘it’s not corruption, it’s politics’ Harrigan is Mayor of the Shire and an ambitious Liberal Party hopeful, with just the right shade of shadiness to connive his pre-selection seat, but still be regarded as a good bloke and good mates with everyone.

And finally, there’s Ross Alexander as Robert Wilson, a stoic, loyal Deputy leader of the committee and the shire, whose indefatigable integrity is sorely tested by Brian. Robert also doesn’t like changes in society but is sympathetic to the causes.

The plot, as the title suggests, centres around the most contentious day in our calendar year – Australia Day – and how that should be celebrated in the fictional town of Coriole Shire (‘that’s www dot corioleshire dot nsw dot gov dot au forward slash corioleaustraliaday underscore organising committee’ if you were to hear about their ‘user friendly’ site on the hotline!) 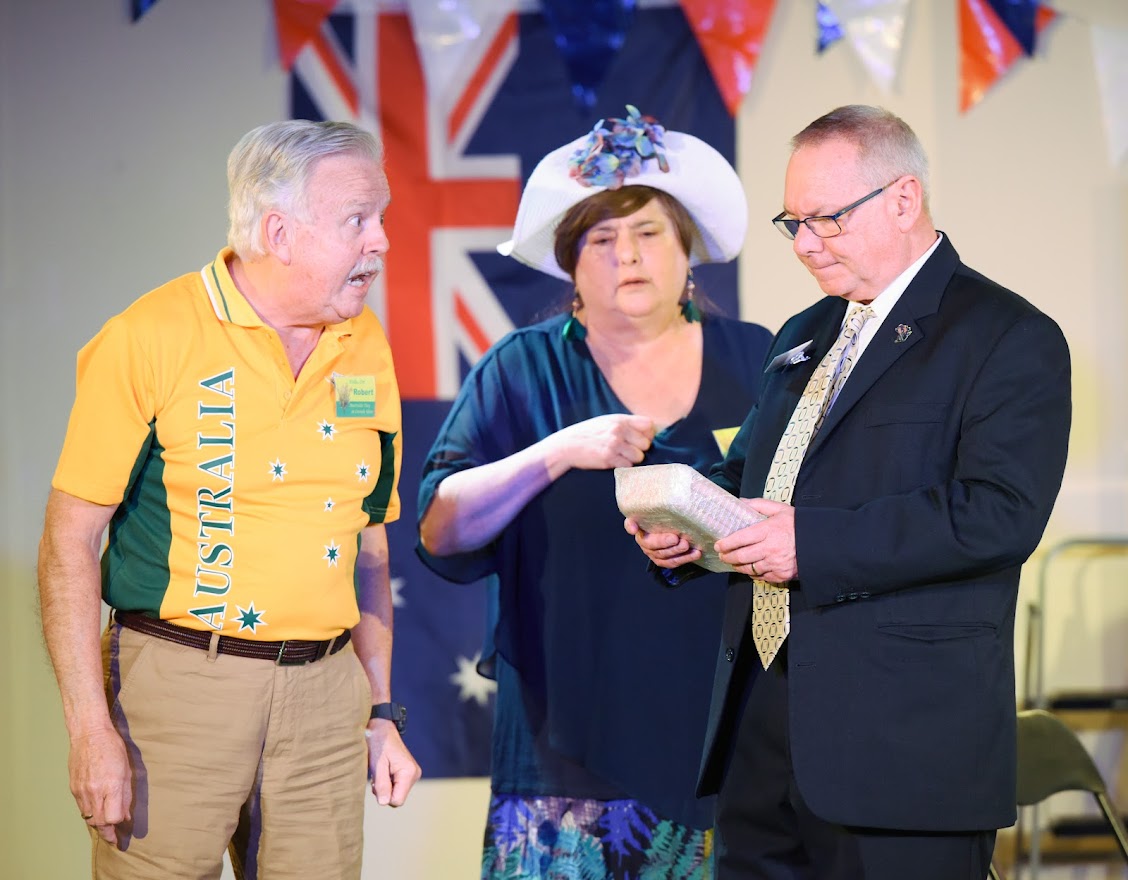 The script feels inspired by Aesop’s Fable of the “The Man, The Boy and The Donkey”, where a man and his son are on their way to town to sell their donkey, garnering constant criticism from passers-by no matter how much they try to accommodate everyone’s sentiment. In the end the donkey dies leaving the man and his son empty-handed. The moral of the fable is that the person who tries to please everybody, ends up pleasing nobody. That underlying message definitely holds true for this play, which is loaded with tidbits of insight and wisdom from each of the characters, despite its brash larrikin humour.

As an opening night performance with awkward beginnings, it was a bit rough around the edges, with one actor cursing out of character when he fluffed his lines. In spite of this, the audience were rooting for this little nugget to get over the line, as it was a case of life imitating art during ‘unpredictable circumstances’ and ‘unprecedented times’. Next, a COVID-inspired play, perhaps?

Australia Day is currently playing at Hunters Hill Theatre at Club Ryde till 25 September. For tickets and show times go to