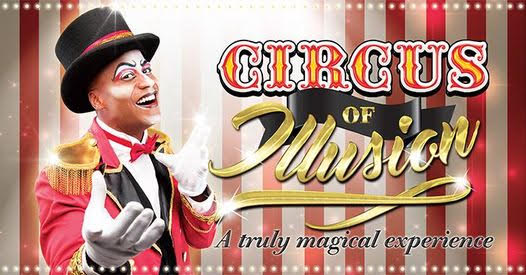 If death and taxes are two certainties in life, I’d like to add a third; the timelessness of magic shows, which have captivated and enthralled people for over 2500 years. A magician making someone levitate or disappear, only to re-appear again in a small box to then disappear again into thin air, never gets old.

In Australia it is acclaimed illusionist Michael Boyd continuing to wave the magic wand with his show Circus of Illusion; the difference from the traditional circus being, that his shows combine both circus and magic fusing jaw-dropping disappearing acts and levitations, with showgirls, ballerinas, strong men, stuntmen, and hoop dancers. Boyd wanted to have his shows on stage rather than under big tops, so the special effects can be more dramatic; this show was performed at the majestic State Theatre, with its backdrop of glitter, bright red bandanas and festive lights.

But, a circus isn’t a circus without a Ringmaster, and a Ringmaster isn’t a Ringmaster unless they can tell Dad jokes, juggle knives and successfully co-ordinate audience participation all in one, which Idris Stanbury did seamlessly through the two hours of magical mayhem. The kids he recruited from the audience did such a good job as his assistants, performing acts like blowing his scarf and hair with a leaf blower to make him look like a rock star, I thought they were ‘plants’, they weren’t.

Personal favourites of the extravaganza were the beautiful illusion of the two ballerinas, magically dancing and disappearing their way in out and of a box, the phenomenal hoop dance which dazzled and mesmerised (and something I might try at home). The daredevil magician extraordinaire Sasha Williams who managed to balance on top of a high tower with bricks and rolling blocks, and the tattooed Strong Man who dangled and contorted his body through a hoop like apparatus.

If the past Pandemic is anything go by, a magic show is the cure. The energy was buzzing, the much-anticipated desire to be entertained by disappearing acts and not caring how they did it was high on the barometer. All in all, a hit with the kids, and a happy place where the families, popcorn and magic all flowed.

For more information about Circus Of Illusion shows check out: www.michaelboyd.com.au