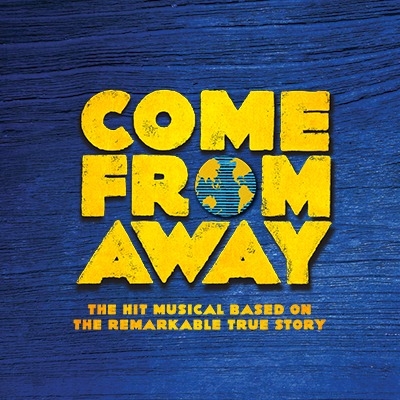 Come From Away is a musical set in the small town of Gander, on the island of Newfoundland (or “the rock” as the locals call it), which lies on the north-eastern tip of Canada. Gander’s airport was long used as a strategic refuelling stop for transatlantic flights, becoming known as the “crossroads of the world” for its vital role in connecting continents. But with the introduction of jet engines, Gander’s airport became redundant as planes could make the trip across the Atlantic without a stopover.

In the aftermath of September 11, 2001, however, Gander became an integral part of ‘Operation Yellow Ribbon’, accepting 38 planes which had been diverted out of US airspace. The population of Gander, at the time around 10,000 people, swelled to accommodate 6,579 bewildered passengers and crew in just one day. When the ‘come from aways’ finally stepped off their flight, they were confronted with the shocking news and images of the terrorist attacks, but were also met with incredible hospitality by the people of Gander.

Locals busied themselves in an incredible logistical operation with community-wide support, coordinating accommodation, bedding, food, toiletries, medications and phone banks for passengers to use. The local skating rink became the “world’s biggest freezer” to house the food that poured in from other communities across the rock. Gander’s place as a “crossroads of the world” was unexpectedly revived, as locals tried to find modes to communicate across language and cultural barriers to give their guests what they needed.

Writing (and life) partners Irene Sankoff and David Hein travelled to Gander for the 10th anniversary of 9/11, and the wealth of stories and perspectives contained in the musical are steeped in the recollections they gathered on this trip. With an ensemble of just twelve actors, they manage to tell a swirling concatenation of stories from the townspeople and their unexpected visitors. Each actor plays a range of different characters, both local and ‘come from away’, and the choreography is so seamless that you rarely notice the transition as actors morph from one character to another. There is no one standout or star, and the flow of the piece is so propulsive with stories that there is scarcely room for character development. It’s hard to single out any one actor for excelling – which is a mark of just how strong the ensemble is.

The musical also doesn’t shy away from the darker sentiments that emerged in the wake of 9/11. An Egyptian chef, Ali, becomes a victim of racial aggression, in the irrational belief that the few represent the whole. In a particularly powerful scene, the character is strip searched in front of an unconsenting female pilot, a needlessly violating experience to allay the unfounded fears of his fellow passengers.

The perpetrators of 9/11 orchestrated a televisual spectacle that made the images the message, one that the media was too complicit in disseminating. The message was received across the world, making us fearful in our everyday activities and suspicious of perceived ‘others’. And yet every year on the anniversary of 9/11, the images again appear on our screens, returning us to that moment of mass mediated catastrophe. Come From Away is a cathartic work precisely because it does not confront the events of 9/11 head-on. Instead, we revisit and engage with the catastrophe from the periphery. Like the passengers who found themselves stranded in the middle of a national crisis, the kindness of the townspeople of Gander provides a buffer to the unfathomable, heartless acts that were inflicted on 9/11. In this space we can revisit this moment with a greater sense of hope, and perhaps a desire to be a little bit kinder to one another.

Come From Away is currently playing at the Theatre Royal. For tickets, click here.