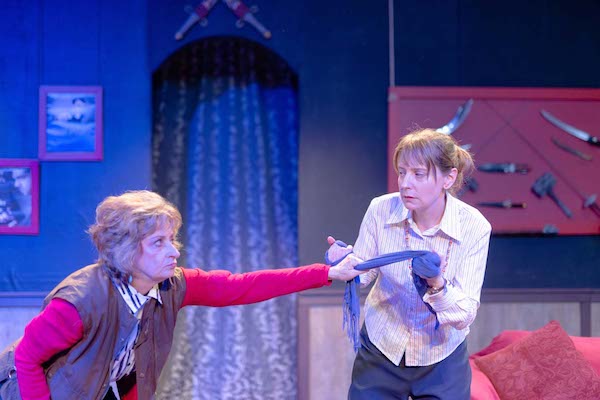 Fortunately, the play you are watching is an acknowledged classic and unequivocally entertaining. As it pointedly makes clear (in one of its Acts - I think it's the middle one) it's not about real life characters, relying instead on a series of contrived circumstances and plotted symmetries, in the vein of Dial M, and Sleuth among others. But I love that kind of stuff, and the core cast successfully nail the sterotypes they represent with admirable flair: the urbane yet ruthless Broadway type (played by Nicholas Gledhill), the brilliant, fledging young puppy writer (Amrik Tumber), and a batty old psychic neighbour with an Eastern Euro accent (Denise Kitching). The producer's wife (Cassady Maddox) has a necessary role in proceedings, although the fifth character, his agent/lawyer (Catherine Waters) is a bit of a loose end until the crucial denouement.

It was opening night, so there were a couple of stomped lines, but I could see that the cast were actively testing for the right spots to play up and this will certainly benefit the rest of the run.
The Deathtrap production team were supported by several other alliances including the Genesian Theatre company and schoolperformanceservices.com for set installation and lighting, Action Acting Academy for choreography and weapons, and a number of others.

Complex, charming and effective. I give it thumbs up. But you'll have to see it for yourself.