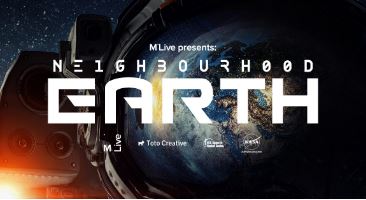 Embark on an amazing journey through our solar system!

Did you know that if the sun were as tall as a typical front door, earth would be the size of a five cent piece, and Saturn would be as big as a basketball? Did you know that in 1957 the USSR launch of Sputnik II had a dog called Laika onboard? Did you know that it took three years to design the A7-L spacesuit for the Apollo missions? And that NASA photographs that big ball of raging fire, the sun, 70,000 times a day.

Neither did I until I geeked out at the launch of the much anticipated interactive, informative and fun space travel exhibition ‘Neighborhood Earth’, which has finally landed in Australia. The reason it has been such a global hit, won awards and toured throughout the USA and Asia, is because its development has been aided by the U.S. Space &amp; Rocket Center, and NASA’s George C. Marshall, which means one gets to experience the latest technology in space science with the latest updates on space exploration; a subject matter that is rapidly progressing.

The cutting edge technology used to take us on our ride through the solar system was in the form of a giant projection-mapped dome in which we were engulfed by immersive surround sound and giant screens. While a ginormous planet earth greeted us, we were then engulfed by a raging sun, and a holographic learning station, where I geeked out on anything and everything about the planets, like the fact that the biggest planet Jupiter is known as the Old Gas Giant.

What followed was an exploration of the science museum featuring pictures and videos of the 60 years of science exploration, including gigabytes of footage captured by legendary spacecraft the Voyager, the Cassini and the Messenger. We walked through a replica of a section of the International Space Station, and watched a peaceful, transportive 30 minute movie all about the planets and the future of space travel; nothing here on earth can protect us from any meteorite by the way.

The more interactive parts were the testing and understanding the force of gravity on every planet; Jupiter was pretty heavy, and how to launch a rocket. I learnt later there is even a ‘Neighborhood Earth’ Spotify playlist.

One thing I was left with was that exploring the solar system is not only fun, but stimulates our senses and opens the mind. I mean…did you know that Jupiter is 318 times bigger than earth, and guess what…some of Saturn’s moons have conditions that might just support life!

If you live for sci-fi, space or new technology, you have to check it out, or if you’re like me and you don’t, it just might trigger a dormant out of this world curiosity for more space knowledge.

Not to be missed.

For more information check out: www.neighborhoodearth.com.au

Season extended due to popular demand. Now at the ICC until January