It goes without saying that Picnic at Hanging Rock by Joan Lindsay is a true icon in the Australian cultural landscape, one that has been cemented in the public’s psyche since the book’s publication in 1967 and film adaptation in 1975. The story of three schoolgirls and a teacher who go missing whilst on an excursion in 1900 has never ceased to cause endless speculation, mainly that the story itself may have been based on true events. The area itself at Hanging Rock in Mount Macedon, Victoria, has an eerie silence hovering over it, whilst the rocks jut out like cavernous teeth waiting to devour its next prey. What made the book particularly brilliant is the psychological portrait of each character and their reaction to the tragic event. Each character is part of the larger architecture of the story, as their encounters and decisions become more and more erratic as the story climaxes to its final horrifying end. With such wonderful material to work with, the opening scene of Tom Wright’s adaptation currently showing at New Theatre leaves a lot to be desired. Instead of a gentle landing into the secret world of feminine love between schoolgirls preparing for their excursion on St Valentine’s Day, we are plunged into a rapid-fire introduction by five interchangeable schoolgirls who take turns impersonating all the characters mentioned throughout the story. Unfortunately, unless one is familiar with the dialogue in the book, it is a rather muddled opening, lacking the subtlety needed to create suspense. Instead of being given a chance to absorb pivotal moments – such as the girls’ exploration of the rock and eventual disappearance – there is excessive dialogue and a great deal of contrived theatrics. As an audience, we are robbed of being able to witness Miranda for ourselves; instead of seeing an actor play her role, her gentle beauty and “what she said” is thrown around like a rag doll between a noisy chorus of voices. 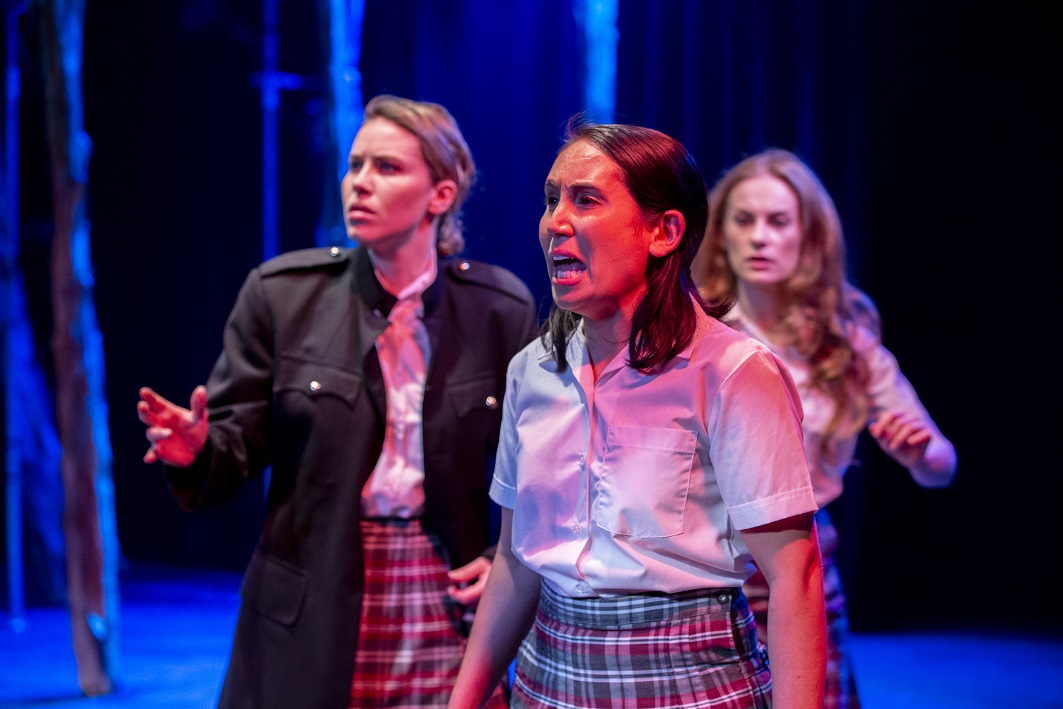 There are other problematic elements with the script that diminishes its potency as a satisfying thriller. Many of the scenes presented in the play, whilst faithful to the lines in the book, often feels like a cut and paste job of randomly selected moments from the novel. Granted, many scenes have been omitted for brevity, however, it also lacks a cohesive narrative to explain the motivations and relationships between characters. Also the costuming is rather inconsistent, with the descriptions of the  schoolgirls’ uniforms (delicate white dresses) is a complete mismatch with their contemporary starchy uniforms. Whether this is a deliberate choice by the director (Sahn Millington) to try and ‘modernise’ the play is unclear, as later Irma Leopold (Audrey Blyde) appears in vintage garb to indicate her status as a perfumed heiress, but the headmistress (Megan Bennetts) always remains in her schoolgirl uniform. The character of Michael is appropriately outfitted in Englishman’s attire, and whilst wonderfully played by Alice Birbara, it is a complete mismatch to his companion Albert (Sarah Jane Kelly, playing each of her assigned roles with long blonde locks), whose only hint of her role as the Aussie coachman is a hammy bogan accent and lots of man-spreading. Perhaps again, this is a feature of “modern theatre” to rely only on caricature for certain characters, but one cannot expect the audience to make a leap of imagination if they are not familiar with these supporting characters in the first place. 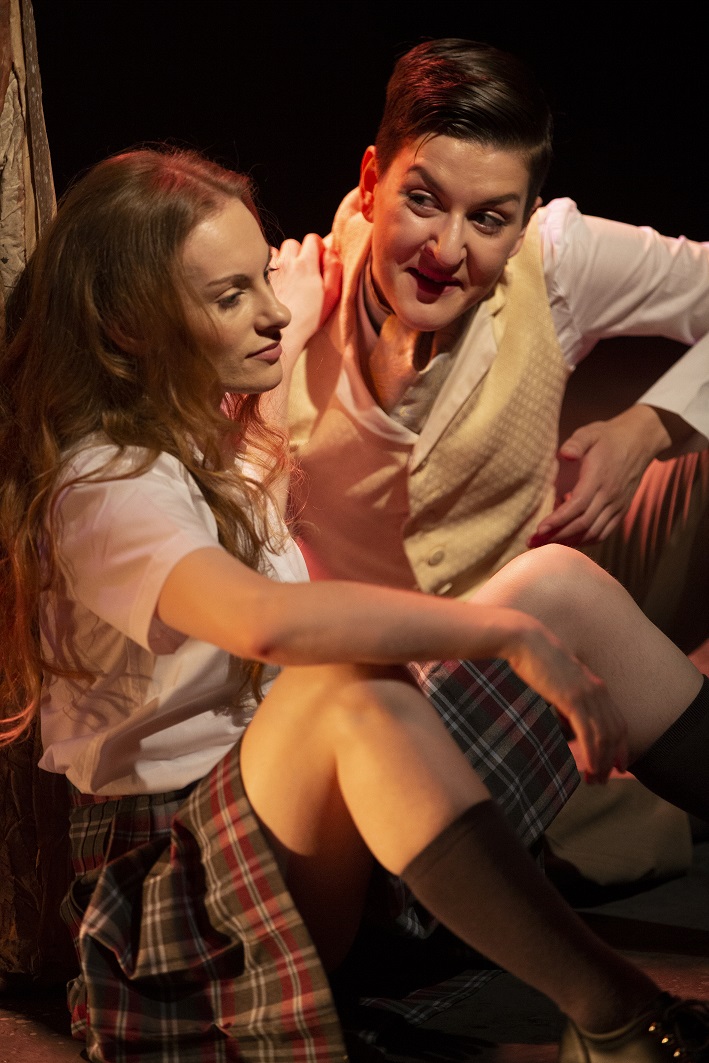 Despite this rather clunky and disappointing opening, there are some truly credible moments throughout the play that are to be commended. Megan Bennetts’ portrayal of the headmistress as an iron lady slowly unraveling into madness is quite disturbing, as are her scenes of inflicting her pent-up anger and rage onto Sara Waybourne (Alana Birtles), a timid and lonely pupil. Michael’s desperate search for Miranda results in a terrifying horror-movie encounter, whilst the policeman’s methodical interrogation of each witness (played by Audrey Blyde) rescues the play from the brink of information overload. 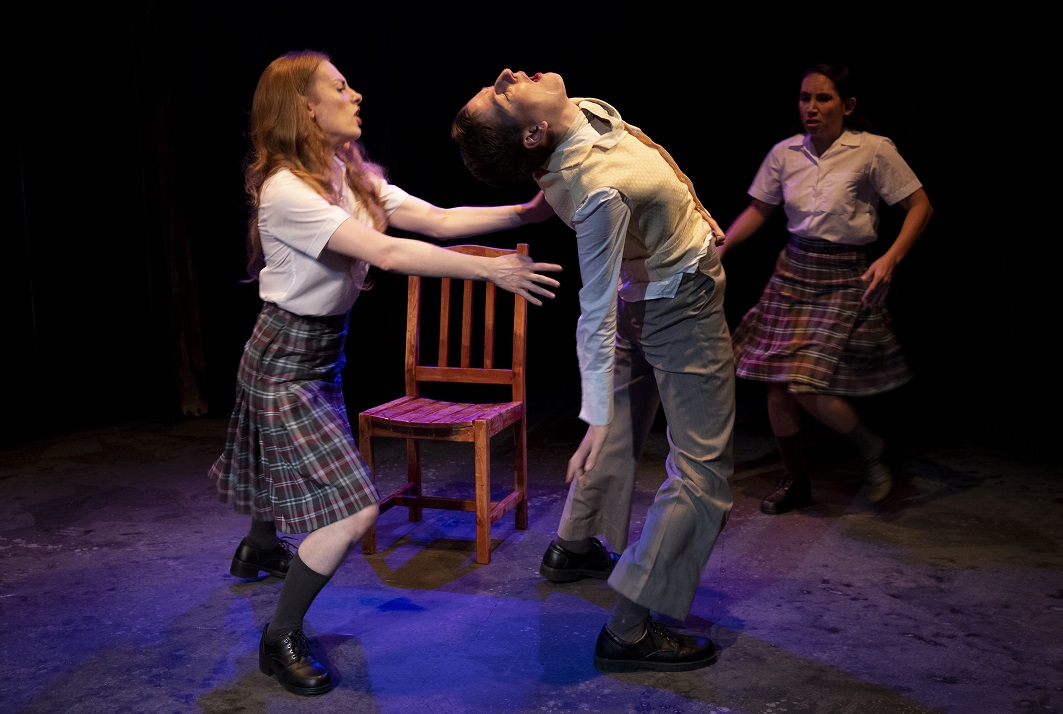 Alas, what unfolds is a truly talented cast underwhelmed by a shallow script of a great Australian legend. Perhaps with a little less busy direction and a more faithful script, the tension and suspense of this compelling and unique story can be fully realised. 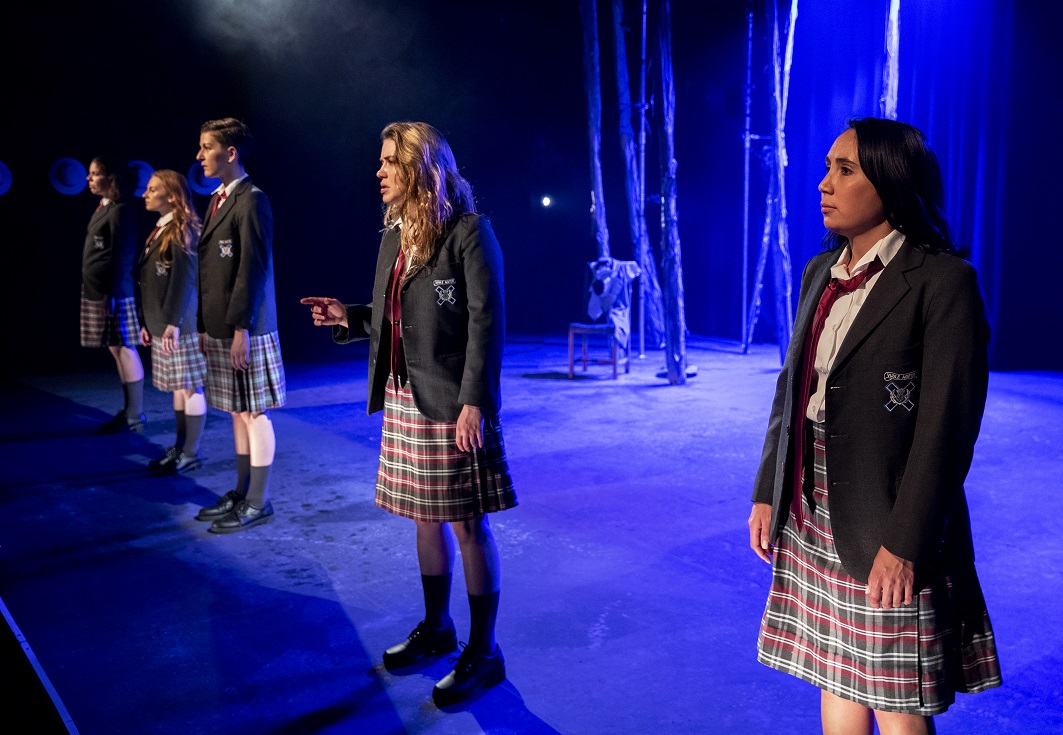 Picnic at Hanging Rock, adapted by Tom Wright, is on at New Theatre till 19

December 2020. For tickets, go to www.newtheatre.org.au.