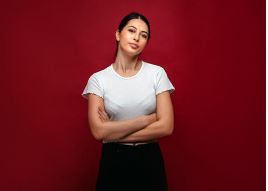 Charisa Bossinakis' stand up comedy show, Pineapple Juice offered up a bubbly mix of salty childhood memories, doozy dating disasters, ethnic grandma jokes and a sprinkling of F-bombs with swirls of random impersonations. The crowd at Sunday night's show at Factory Theatre seemed to lap up every bit of it even though we were crammed like sardines in a tiny box called The Container, leaving no chance of seeing the shining star on stage if you were seated up the back, let alone socially distance. Nevertheless Charisa's energy sparkled through a fire-cracking quickie set that lasted just under 45 minutes, leaving the audience hungry for more and eager to see the next show. 3.5 stars.