Since its creation by dynamic duo Angela Blake and Ali Crew (pictured below), filmmakers of all ages, from all over Australia – and every corner of the world –
have taken to this hugely accessible and creative festival…whose main rule is that all movies must be shot entirely on a mobile phone or tablet! 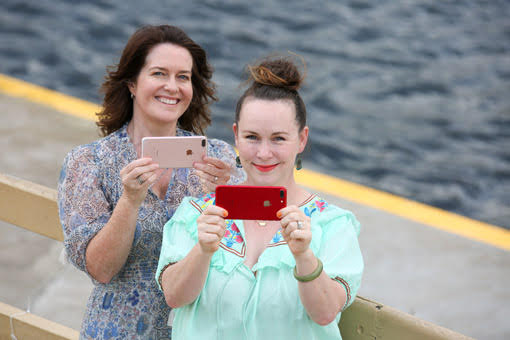 Last year the festival weathered the Covid storm with a combination of online and live screenings.
This year the Gala Awards Final – in partnership with the Australian Film Television and Radio School (AFTRS) -
is confirmed for Saturday 27 November 8pm at the Chauvel Cinema Paddington.
Its popular SF3 Kids, Feature Film and new SF3 Mini screenings will take place at the Actors Centre Australia in Leichhardt
throughout the afternoon and evening on Sunday 28 November.

SF3 Mini is a reimagining of the popular and timely ‘ISO’ Award last year – where filmmakers were challenged by their home lockdown circumstances.
Now with an annual theme (this year ‘Rise’) SF3 has partnered with the United Nations Association of Australia (UNAA)
and filmmakers are inspired by the word RISE and the 17 Sustainable Development Goals or SDGs of the UN (https://sdgs.un.org/goals).

Another exciting innovation is the SF3 First Nations Award – sponsored by Dolby.
This is open to the best and most promising filmmaker – worldwide - who identifies as First Nation, Indigenous and/or Aboriginal.
On offer for the winners are mentorships with SF3’s new Indigenous Festival Ambassadors:
journalist and producer Stan Grant, actor and director Wayne Blair and high profile screenwriter Jon Bell (pics attached).

Grant is not only a high profile Australian media personality but writer of the Adam Goodes documentary, Australian Dream.
Blair’s credits include The Sapphires and Top End Wedding, while Bell’s include The Gods of Wheat Street, Redfern Now, Cleverman
and a recent attachment with Taika Watiti on the latest Avengers movie!
They join returning Festival Ambassadors Phillip Noyce, Kriv Stenders, Nicole da Silva, Jason van Genderen, Kerry Armstrong and Christopher Stollery.
The first ever SF3 Kids Ambassador is Emily Prior and the first African Ambassador is the extraordinary Wanuri Kahiu from Kenya (www.wanurikahiu.com).

Among the other more than 30 awards across the five categories are the #FILMBREAKER award for first-time filmmakers,
Best Female Creative, Best Feature Film, two SF3 Kids Best Film awards (Teen and Junior/Primary)
plus three new ‘gongs’: Best Documentary, Best Editing and the SF3 Luma Touch, Finished on Mobile Award –
for a film that is both shot AND edited on a smart phone or tablet.
Amazing prizes include mentorships, equipment, classes, professional memberships and more.

And - in more great news for budding filmmakers - SF3 will this year host a series of four FREE weekly online panel discussions & masterclasses
featuring SF3 Ambassadors, Judges and smartphone filmmakers, every Sunday at 5pm throughout May from the 9th.

Iconic Aussie actor and festival ambassador Kerry Armstrong (Lantana, Seachange) said:
“It’s so wonderful to see smartphone films catapulted onto the big screen for all the world to see!”

And filmmaker Philip Noyce (Rabbit-proof Fence, Heatwave, Bluu Drift) added:
“A smart phone is an instant portal to the world. These innovators have no fear of technology, no barries to expressing themselves.
These are truly our next generation of cinema pioneers… I’m in awe of their films.”