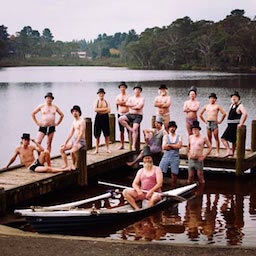 The Spooky Men’s Chorale delivered a satirical, insightful and comical performance on Friday night at Newcastle’s Civic Theatre. Led by director/songwriter Stephen Tarberner, the group performed many original songs that subtly reflected on the social and political landscape of Australian society.

This was the Spooky Men’s second performance at Newcastle’s Civic Theatre with many of the audience members attending for the second time. Tarberner’s direct interaction with the audience always evoked laughter and resonance, with his comedic timing effortless. A highlight of the performance was a song entitled “Jim”, comedically reflecting on the lawn mowing service chain Jim’s mowing. Despite the general absurdity and outrageousness, there was a tonal shift when the group performed “A picture in a frame” striking an emotional chord with the audience, with an extremely sustained applause.

As a first-time viewer I would definitely say The Spooky Men’s Chorale was a show I didn’t know I needed to see, until I had. Those who have not yet been initiated into the spookyverse should definitely find the opportunity to at one of their upcoming shows.