Whoever said that weekends are a time for rest, relaxation and reflexion didn’t have kids. Filled with play dates, dance school, drama schools, sports clubs, birthday parties and kids generally running amok around the house there is no time to stop and unwind. By the time Sunday afternoon rolls around, most of us parents are exhausted, brain-dead and looking for some peace and quiet at work. However, at times an occasion arises offering a much-needed reprieve.

Last Sunday was such a day, a winning combination of music, tea and me. Having spent the entire Saturday pandering to my offspring, I decided Sunday was a chance for some mummy pampering.

So it was that at 3:30 pm I found myself sitting blissfully still with my eyes closed lost on the melodious waves of classical music. And who better to perform than Australia's most internationally successful piano trio,' the Streeton Trio? If music is the food for the soul, then these tree young Australian musicians Emma Jardine on violin, Trish O’Brien guest cello and Benjamin Kopp, piano, indeed served a treat and satisfied my hunger. 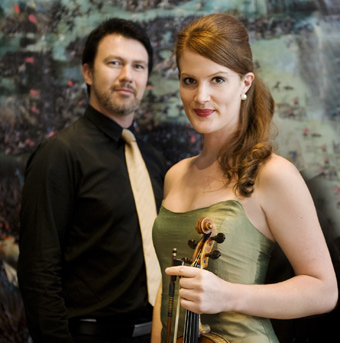 The afternoon, which is part of a popular Prelude in Tea series, included a melodiously satisfying serving of Beethoven and harmoniously fulfilling Schubert.  The program, simply named “The Classics” complemented the mood of a late Sunday afternoon. Although Beethoven’s “Archduke” Piano Trio in B flat major Op.97 may not be the best that Beethoven has to offer, it being one of the pieces composed when Beethoven could no longer hear. In fact, it was initially received with some reservations. Mind you, the Trio’s rendition was enthralling. However, my heart truly skipped a beat, and I was totally lost, during the enchanting rendering of Schubert’s glorious Piano Trio in E flat major D.929.

Listening to the Streeton Trio it was clear to see why it won the 2011 Music Viva Chamber Music Competition and why it was featured as Musica Viva's Rising Stars ensemble. The Trio’s performances in venues such as Wigmore Hall, Het Loo Royal Palace (Holland), Shanghai Oriental Arts Centre, Melbourne Recital Centre, Trondheim Festival, Apeldoorn Festival, Pablo Casals Festival (Prades) and Bangalow Festival have received great acclaim. And I am sure it is only an indication of what is to come.

I am certainly looking forward to the next afternoon tea in the company of musical greats resurrected by young Aussie musicians. And I won’t say no the delectable dessert, and soothing coffee served before the show and all part of this delightful Sunday escape.

My one minor grievance was the acoustics, which didn't seem quite favourable. The atmosphere of the Independent Theatre is still as enthralling as the first time I experienced it, and I’ve always had a soft spot for this venerable venue. However, a visit from a sound expert may prove beneficial. Who knows, I may be going deaf from all the boisterous yelling of the kids (four-legged included).

Overall, this was a delightful afternoon and a mother’s escape from madness. I’ve felt recharged and rejuvenated and ready to face the wild tribe waiting for me at home.

So, keep an eye out for the next concert on the last Sunday of each month.

A Prelude in Tea Series