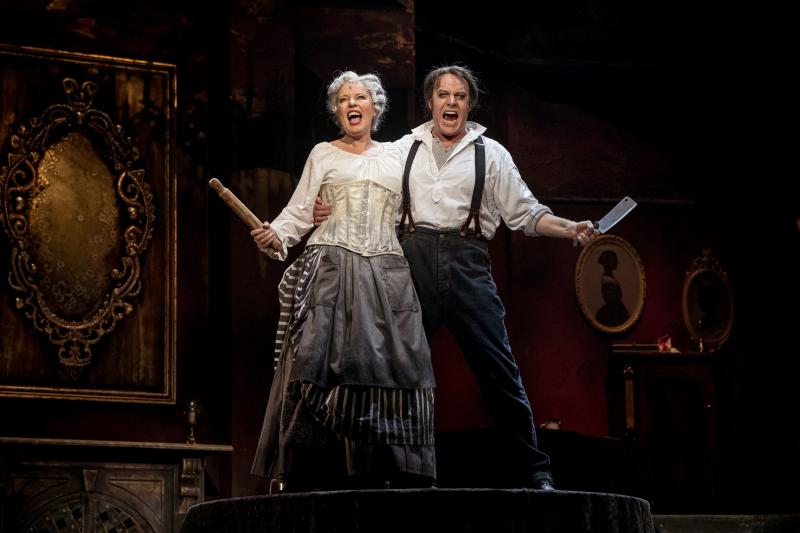 It was opening night AKA Thursday the 13th, but it should have been Friday the 13th in more ways than one. “Sweeney Todd” is the deliciously-dark and murderous musical about a demonic barber. This latest production has some fabulous ingredients, with big stars embracing a Stephen Sondheim score. But while this show had some great moments, there were some things that stopped it from being a cut above the rest.

The proceedings were staged in the cavernous Darling Harbour Theatre, a venue that seems more suited to a live talk or presentation. This meant that there was a feeling of disconnect between the audience and the stage. This fact was magnified during the first half hour when some noises from outside permeated through. The theatre does not have a lock-out policy and the two large aisles on either side were still lit up throughout most of the proceedings. This meant it felt more like a 7-11 rather than the intense and atmospheric vibe one would expect with this material.

Anthony Warlow is great and macabre starring as the titular character. He is a wronged man who seeks revenge against Judge Turpin (played by international opera singer, Daniel Sumegi). The Judge sends Todd away to Australia for 15 years, which enables him to rape Todd’s wife (Debra Byrne). The judge also becomes the guardian of Todd's young and innocent daughter Johanna (a sweet, Genevieve Kingsford). Sweeney Todd reopens his barber shop and starts murdering his patrons one-by-one. His largest and fiercest blade is reserved for the evil Judge.

Gina Riley – who is renowned for her comedy acting rather than musical theatre roles – stars as the kooky and off-beat Mrs. Lovett. She’s the owner of the downstairs pie-shop. As the body count increases and Todd’s destruction continues, Lovett starts using the corpses as fresh meat for her quote, “Worst pies in London”. Riley’s vocals are lovely and she really basks in the dark comedy elements.

This production is in celebration of the 40th anniversary of Sondheim’s classic. It can be a challenging one to stage because it is filled with rich characterisation and a beautifully-complex score. The 22-piece orchestra led by musical director and conductor, Vanessa Scammell played well. But their placement at the right-hand side of the stage presented some sound problems. These took the focus away from Sondheim’s soaring arias, and the dark and intimate score. This was also exacerbated by some clumsy lighting transitions for scenes that occur between the pie and barber shop, respectively.

Charlotte Lane’s set was well-constructed and it captured the seedy underbelly that serves as the setting. Theresa Borg's direction captured the spiritual elements as well as the dark undertones and black comedy. There were moments where it was as raw and emotional as you would expect, but there was room for a more visceral and human element to this darkness.

“Sweeney Todd” is a musical that can be thrilling in the right set of hands. With its dark twists and turns, this is a show that can really seem like it’s on a knife-edge. And while the drama was there, it felt like this blade had missed the mark because ultimately this show just wasn’t potent enough.