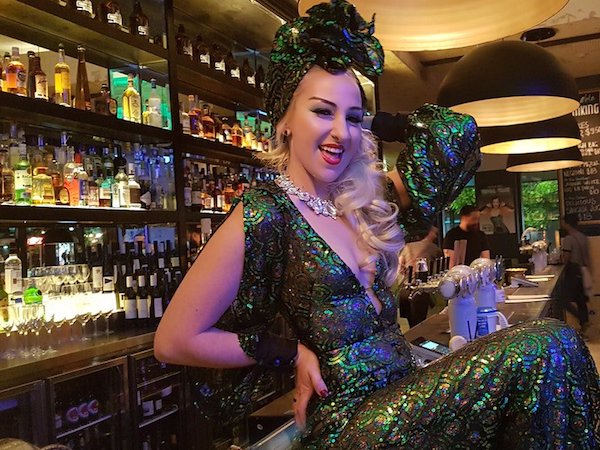 The Bamboozle Room brought to the Sydney Fringe a Talk and Tease show - Gin and Jungle Juice.

It was certainly a night I won't forget for a while, possibly ever. The Jungle theme was very real with a Gorilla and Banana running round the audience before the show and during the interval. I am not too sure where the Gin was, though thinking about it one of the Burlesque performers was called Ginger Foxx.

Anyway. Memphis Mae was the MC for the night and she was fantastic, very entertaining and she had to work hard to get the audience going, and the show running relativelysmoothly The audience I think at times we just stunned into silence!

The show contained Burlesque, Acrobatics and a Stand Up Comedian. 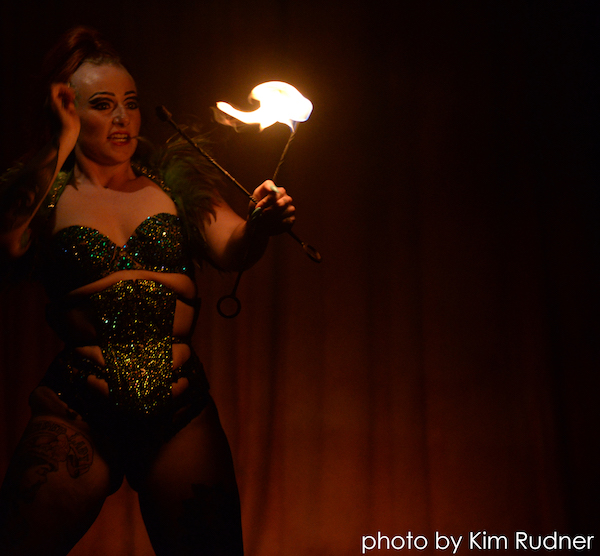 Ginger Foxx is a traditional Burlesque performer. She had amazing costumes and lots of feathers! Tamara Rose was a cave girl, she even had a dinosaur. She was great and I loved the hairy armpits! Leopard Lass did two routines. The first was more traditional but the second was something you don't see every day. She used fire and she could twirl like nothing on earth. Twirling fire with your ass cheeks is something you have to see to believe.

The acrobatic duo was Joe and Cat Bolitho, they were great. It was good because she is very slight and was very elegant with her moves, while he was the strong male to support her and did a bit of Hip Hop in contrast. They were both very strong and flexible.

Then there was male Burlesque dancer Croc Dundee - Mac Galleon. He certainly got the audience, particularly the women, going. His Croc Dundee theme was funny and even gave the audience Vegemite sandwiches!

Marty Bright was the stand up comedian who was also pretty good, he had a good banter with the audience and talked about first dates.

The night did feel like they winging it a bit, not the performers, but more the production of it. From the audience’s reaction I think there were some mixed feelings, but whatever, you can’t say you didn’t laugh and that you weren’t entertained.

First Saturday of Every Month