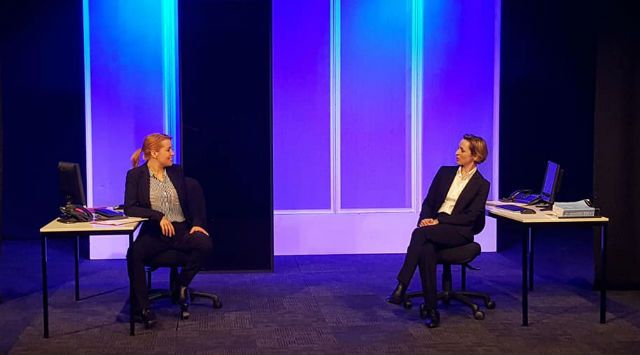 The Elements of an Offence is a lighthearted look at the bureaucracy as two Police Officers have a difficult case to handle. To add to it the two female officers are also lovers.

The two female actors - Sarah Aubrey and Amelia Robertson-Cuninghame were very good.  As the performance relied on just two actors they had to be strong and the pace of the performance had to be right. Also, the tone, Detective Inspector Rachel Marks had to persuade Detective Sergeant Christine Anderson to take the case and come to the right conclusion. There is a lot of emotional banter and the intensity of this had to be right, otherwise it would have been a bit over bearing to watch.

Even though the play is quite short it packs a lot in, it looks at the relationships between two workplace lovers. It was looks at the bureaucracy as they try to bring a case against a fellow officer.

The set was simple and the lighting subtle. But this worked, as it was the dialogue between the two which is the main focal point.

Three of us went to see the play and all of us enjoyed it. Well done to all the cast, crew and of course Alice Livingstone the Director.