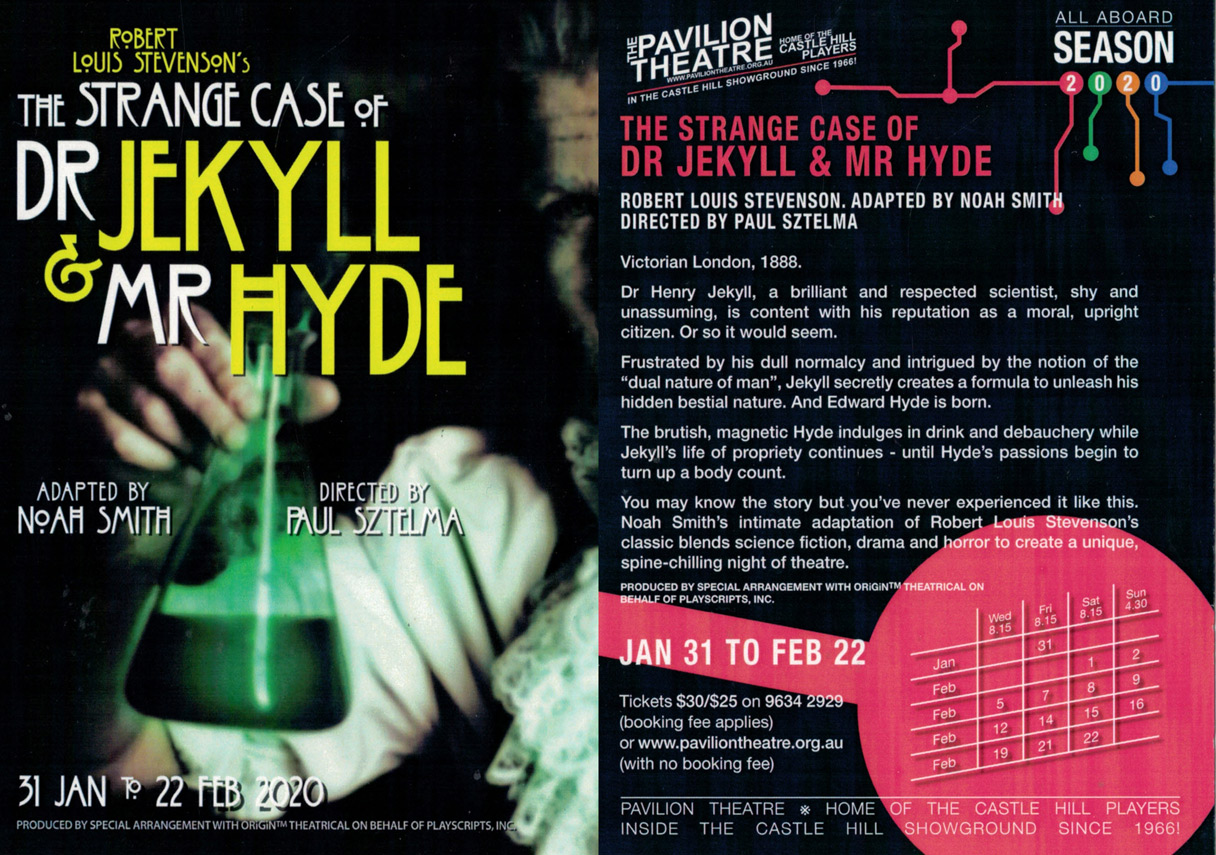 It’s always fascinating to hear stories about split personalities, and I do love a good gothic thriller, so it was an immense pleasure to watch a play that combined these two elements: The Strange Case of Dr. Jekyll & Mr. Hyde. The novella by Robert Louis Stevenson, first published in 1886 and later adapted as a play by Noah Smith, has had enormous influence in film and literature, while the term ‘Jekyll and Hyde’ is part of our vernacular to describe someone who is two-faced or displays two opposing characters. Combining Victorian melodrama with our contemporary understanding of Jekyll and Hyde is no easy feat; it takes tremendous vision, skill, risk-taking and commitment to bring this deeply embedded concept to life. Castle Hill Players’ production of The Strange Case of Dr Jekyll & Mr Hyde rises to the challenge with extraordinary flair. 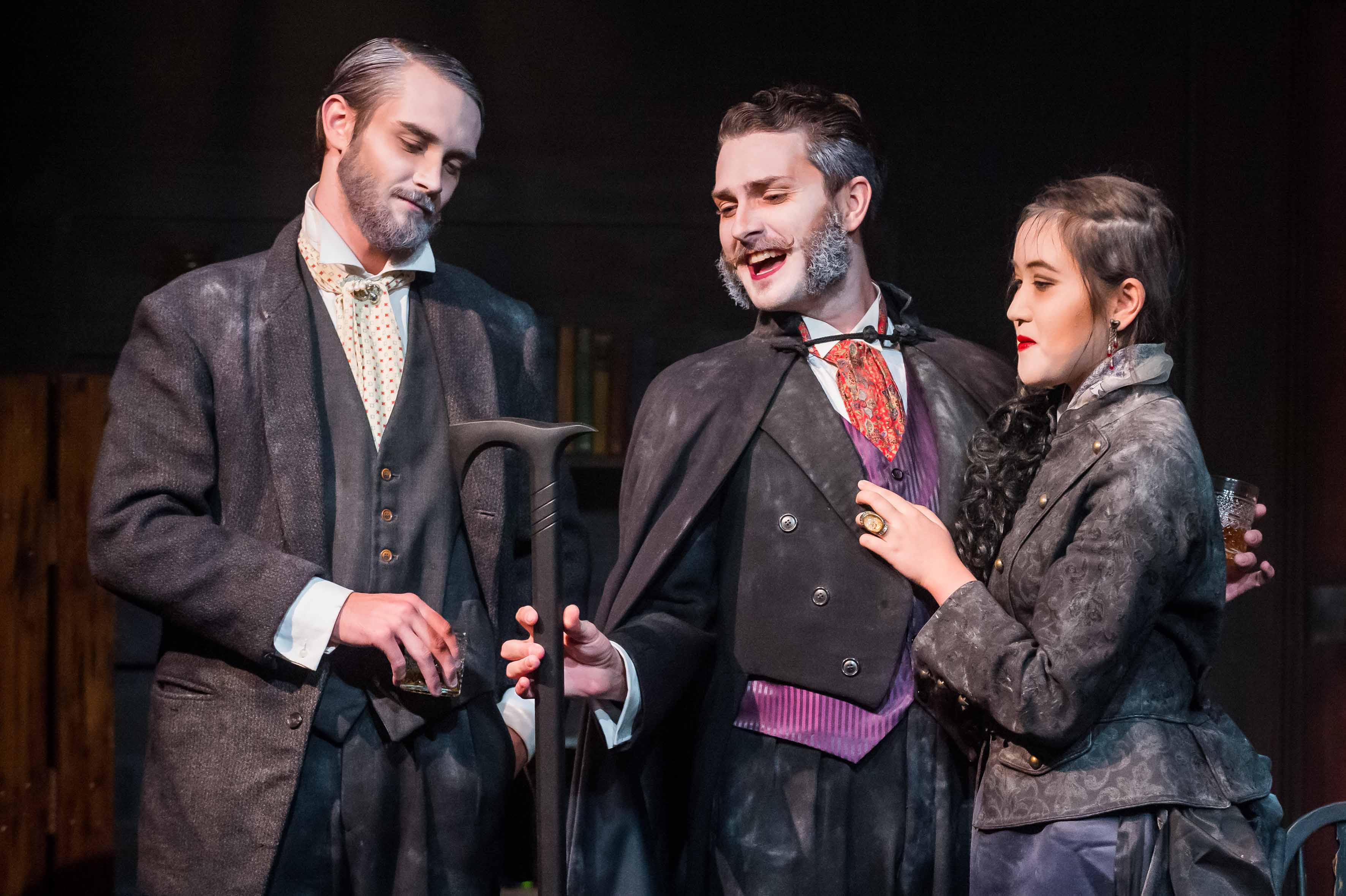 The first thing that strikes you is the set; the façade of a multi-story building slanted on an angle to form a perspective down a dark, misty street, illuminated by building lights. Outside is a table, a few chairs…and a door. (This reference to the setting is repeated throughout the entire play). It is on the outside and inside of this building that we see the action taking place, and sometimes scenes are repeated to show them from a new perspective. We see one character entering a door from a scene outside, and entering through another door to the scene within, and more often than not, what the characters experience as they walk through that door is shocking and disturbing to say the least.

The two side characters, the maid and the butler offer a narration throughout the play. But their presence quickly becomes sinister as it transpires they are also the ‘voices within our minds’ that urge us towards ungodly temptations. In this case, they taunt Dr. Henry Jekyll, a well-mannered, well-respected doctor in the community who has published journal articles on his theory of the dual personality of man and how this can be scientifically manipulated. Dr. Jekyll is curious about unlocking his ‘other self’ – someone who is freer and more confident than he is to experience his less respectful desires. And so, despite the misgivings of his closest circle of friends, Dr. Jekyll invents a potion that will give him access to his other-self. And thus, Mr. Edward Hyde is born. 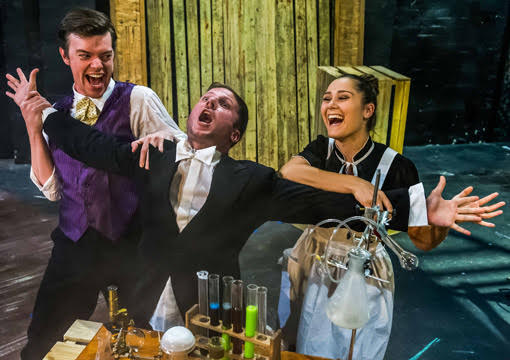 The transition from Jekyll to Hyde is the scariest and most captivating thing to watch; Dimitri Armatas in the role of Jekyll and Hyde plays with an eager earnestness that is electric and endearing. No wild costumes or makeup is needed here to convince you of who is playing in any scene; Armatas effortlessly becomes Hyde with a hoarse,  threatening voice and misogynistic swagger that soon spills over into violent outbursts. Unfortunately, his friends suffer at the hands of his murderous appetite, which he describes in chilling detail.

Jekyll’s circle of friends includes Dr Hastie Lanyon (Hamish Macdonald), Gabrielle Utterson, a lawyer (Jonathan Burt) and Richard Enfield, Utterson’s cousin (Adam Garden), who all play their roles with the skillful duality that they require. Lanyon, initially presented as confident and unshakeable, is distraught at Jekyll’s meddling in ungodly affairs, and alas, he is proven right to be afraid. Utterson seems loyal and dependable, but a few nuances suggest that he is also susceptible to temptation, such as a suggestive brush against his cousin’s fiancé. Enfield is a cad who frequents a brothel during his engagement with Helen O’Neil (Vanessa Purnama), yet upholds a sanctimonious face in public. 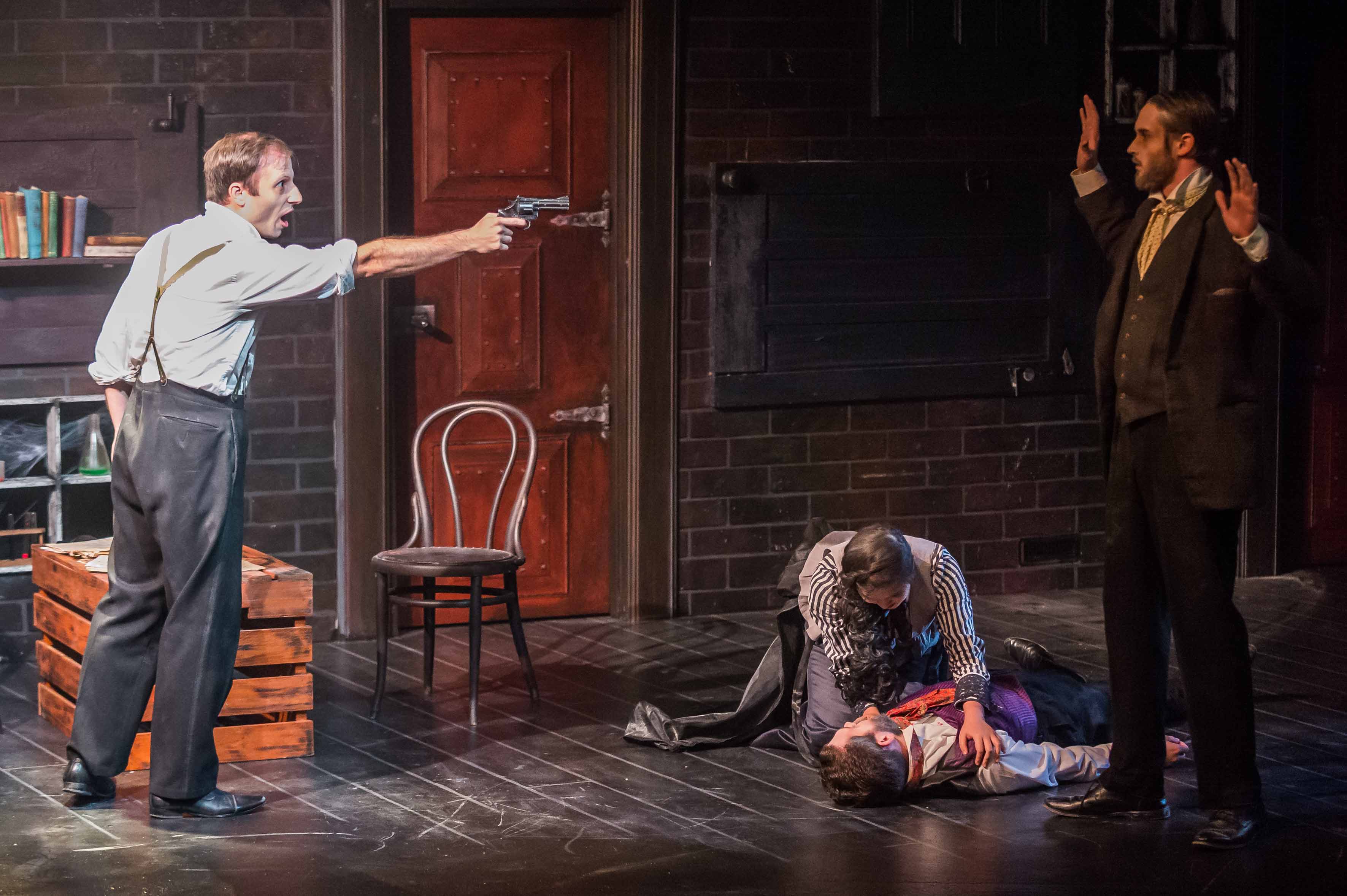 Rounding out the cast is Cybel (Faith Jessel), who turns in a solid performance as a street-wise prostitute, capable of subduing Mr. Hyde. The maid (Nicole Harwood) and the butler (Robert Snars) shift into other small roles with perfect accents and mannerisms.

Overall, the cast feels cohesive and committed to the script, though it might have been better to introduce Jekyll more seamlessly in the opening scene with less narration by the side characters, which felt intrusive and distracting. Also a shout out to Vanessa Purnama making her stage debut as Enfield’s fiancé and admirer of Jekyll’s work; as the season wears on it would be good to see Purnama getting more comfortable in her role and allowing herself to switch gears. But a great debut, nonetheless, in a very ambitious role.

It should also be mentioned that the cast not only had to rehearse a complex script but was also involved in the construction of the spectacular set. With such labour-intensive work, no wonder they had dusty costumes (a sight gag which drew laughter from the audience). Adam Garden also participated as a Violence Coordinator (!), certainly, every production needs one to make theatre violence look incredibly realistic. 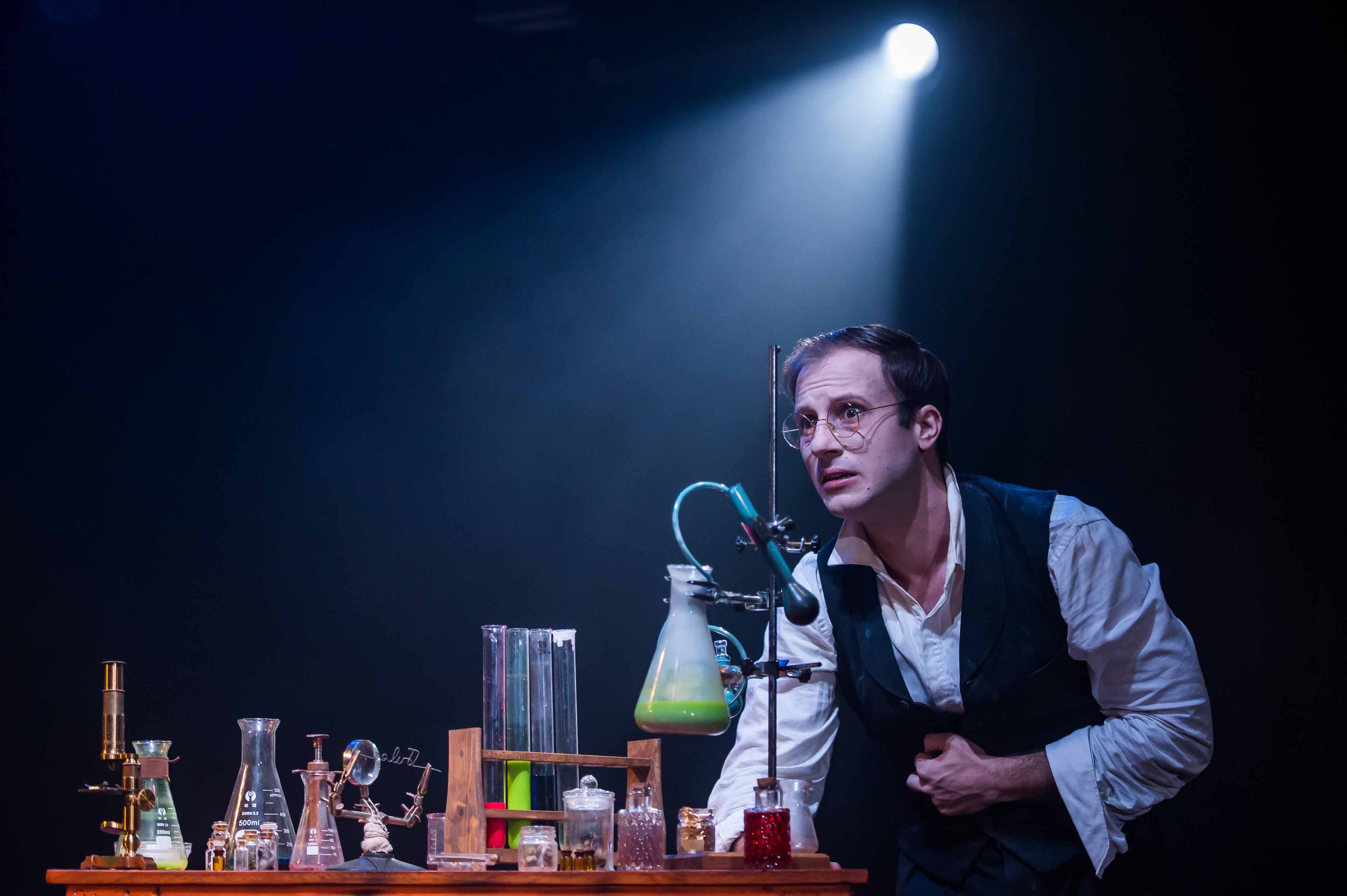 On a final note, the Director, Paul Sztelma, did an amazing job of bringing a community spirit to this alchemic production. In his speech after the show, he referred to the cast and crew as being like family: “If Jekyll and Hyde is my baby then I’ve worked with a lot of mothers.” Well done to Sztelma and his theatre family for bringing a five-star production to Castle Hill, truly a masterclass in stagecraft, set design and working with an ensemble of talented actors.

The Strange Case of Dr. Jekyll & Mr. Hyde is highly recommended and a wonderful opportunity to support local community theatre. For performance dates and times go to www.paviliontheatre.org.au.