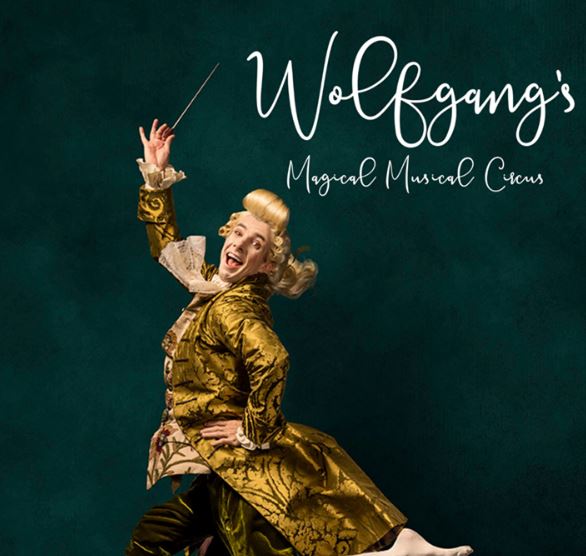 Can Mozart be cool? Can he rock and dazzle today's easily bored youngsters? How does Mozart compare to the world of ROBLOX and Minecraft? Can he even compete? I am a huge classical music fan (I'm one of those women who made their pregnant belly listen to classical music). As a Mozart lover, I was intrigued by Wolfgang's Magical Musical Circus. I adore the circus and never miss a show when the big chapiteau comes to town. Could the twain ever meet? Mozart and circus - an odd combination, to say the least. Or is it? I knew I would be tickled to the core, but how would my daughter fare? Could my spoiled progeny be entertained? Anxiously I went along to see the latest instalment in Circa's wonders.

For those of you unfamiliar with Circa, it is circus reinvented. It is circus without limits, a circus designed for the new age. Since its inception, Circa has grown a massive following of fans and a reputation as the world's most imaginatively audacious circus. Their huge variety of productions caters to all tastes and ages. They range from massive operas and immense choreographic phenomena to cosy chamber performances. The scope of Circa's vision is unequalled.

Wolfgang's Magical Musical Circus premieres Circa in a new partnership with GWB Entertainment and Trafalgar Entertainment. Richelle Brookman, Director, GWB Entertainment, said, "We're absolutely thrilled to partner with one of the world's leading performance companies. What Circa brings is phenomenal. If you think you know circus, just wait until you see these spectacular shows."

Staged at the beautiful Theatre Royal in Sydney, the show was designed to astound people from the young to those young at heart. Surprisingly, Mozart himself makes an appearance, powdered wig and all! He is, however, not the classical maestro one may imagine. In fact, he resembles the cinematic creation of Milos Forman's Amadeus. Rascally and puerile, Circa's Wolfgang is a dart-playing, joke loving ratbag. He flips and tumbles, twirls and balances in the air, rides bikes, and much more. Yet somehow, he is still a genius Mozart, a virtuoso unparallel to this day. Circa's Wolfgang is not only a musical genius. He is also a mischievous physical comedian with an uncontainable spirit

Sitting in the audience, looking at the stage but equally amused by my daughter's response, I knew this was a winner. The show features super agile daredevil performers and one accordionist. The artists work their magic as notes magically rise off a page, and well-known symphonies come to life. It is mind-blowing musical mayhem with a circus twist that will leave your entire family shaken and stirred.

The ensemble is flawless, and everyone works together as a superb well-oiled machine. Victorian College of the Art graduate Kathryn O'Keeffe and the self-proclaimed nut Paul O'Keeffe bring unique chemistry to the stage, with Accordionist Gareth Chin completing the picture. There were giggles and laughs galore with plenty of oohs and aahs followed by shrieks, exclamations, and thunderous applause.

The simple stage design and clever use of minimal props place the focus where it should be, the classical genius of Mozart and the extraordinary skill of the performers.

This is an absolute must-see for the entire family. Wolfgang's Magical Musical Circus certainly hits all the right notes.

Tickets are on sale now for the strictly limited (20-24 APRIL) season www.theatreroyalsydney.com