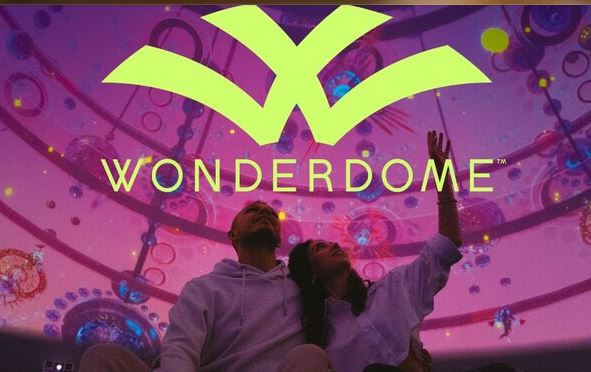 Reviewed by Georgia Cassimatis
Firstly, it was the post Covid Lockdown excitement where we were the first in Australia to explore a transformative new way of watching film, with other people. Then it was the popcorn and the strawberry alcoholic slushy on arrival, which we savoured next to the 360 degree ‘Pop Up Dome’, after which we were launched into what was the main event; Australia’s largest first ever 360 degree cinematic experience.
Roll over IMAX, this new to Australia, extrasensory cinematic experience called WONDERDOME visually wraps itself around you, catapulting one into a new reality. As soon as our slushied mugs hit the super comfy sustainable beanbags, we were taken on a 30 minute cinematic ride where we experienced a buffet of genres; from Christmas films, kid flicks, psychodelic film, arthouse, crime and  documentary.
Founded by three Aussie blokes who were inspired by the  growing, evolutionary technology of psychodelic, cinematic films at worldwide events such as Coachella and Burning Man,  TEG Live have succeeded in bringing this concept to Australia.
The 29 films featuring at Sydney’s EQ this Summer include Flying Monsters, a National Geographic film narrated by David Attenborough about flying dinosaurs, Dynamic Earth which explores the inner workings of Earth’s great life support system, and the global climate, narrated by Liam Neeson, Carriberrie, a journey across Australia celebrating the depth and diversity of Indigenous dance and song from the traditional to the contemporary, as well as family-friendly films such as The Meadow Racers and Magic Globe and the Christmas show Snowflake Adventure.
My favourite was the psychodelic, visual feast Samskara, which apparently was the choice of the audience that night, because the producers let us savour 30 minutes more of this entrancing film full of mythical creatures in fantastical environments. We were so mesmerised, hypnotised and in such a trance like state of bliss, we just lay there afterwards relishing the aftermath. If one ever saw the groundbreaking, breathtaking film Koyaanisqatsi by Francis Ford Coppola 20 years ago, it reminded me of this; where film is taken to a whole other level, where you won’t think of film in the same way again.
Which is how you will leave after experiencing WONDERDOME.
Don’t miss out.
WONDERDOME runs Saturday 4 December 2021 – Sunday 30 January 2022 at The Entertainment Quarter, Sydney. Tickets now on sale. For more information, visit: www.wonderdome.com.au for details. All ages welcome.
SHARE
TWEET
PIN